This is my reply to the Ministry’s affidavit of 12 July which seemed to rely on the fact that CL Financial is a private company to refuse publication of the requested information.

Of course that line of reasoning is yet another emerging threat to our country’s Integrity Framework, so our reply challenges the validity of this assertion.

At our hearing on 1 October, Justice Boodoosingh ordered me to formally notify CL Financial and we have done that, so at our hearing earlier today, CL Financial were represented by a team led by Stephen Singh and various dates were set, with our next hearing on 27 February 2014.  Of course that is the very Carnival week, so stay tuned. I expect there will be significant other developments well before that.

I took this title from the late 1930’s kaiso by the great Atilla the Hun (Raymond Quevado) on the scandal of some $200,000 missing from T&T’s Treasury.  His outrage was rooted in the fact that the story came-out in bits and pieces and of course, none of the ‘Big-Boys’ was ever jailed, or even charged for that theft.  That was a massive amount of money in the 1930s – at that time a good Woodbrook house cost about $6,000 – so that could give you an idea. Atilla was lamenting the lack of accountability and transparency in how Public Money was being managed.  The ‘Treasury Scandal’ was a true episode from the bad-old-colonial-days of the 1930s, but of course we have progressed a great deal since then, having achieved Independence, Republican status and universal education.

The problem is that despite the obvious movement forward, we are witness to yet another ‘Treasury Scandal’. I am referring to the CL Financial bailout, announced in January 2009 and still ongoing at an anticipated cost of $24Bn – according to paras 21 and 22 of the 3 April 2012 affidavit of then Finance Minister, Winston Dookeran.

It is vital to look back before we go forward.  In 2008 and 2009, the Indo-Trinbago Equality Council (ITEC) campaigned strongly on the issue of the Secret Scholarship Scandal’. The suspicion was that there was a secret scholarship fund operated by the State without any transparency and ITEC used its Parliamentary representatives and the Freedom of Information Act to force the Patrick Manning-led PNM administration to publish the details they had been trying to conceal.

The published details included the names of those who benefited from the funds as well as the amounts, dates of payments and details of the courses of study to be pursued.  Some of the more controversial issues to emerge from the publication of those scholarship details were –

A total of $46M of Public Money was paid during the 5 year period under examination.  The President of ITEC at that time was Devant Maharaj and its leading attorney was Anand Ramlogan, both of whom now serve in the Cabinet.

I fully supported ITEC in that use of the Freedom of Information Act to force publication of important information on the use of Public Money, which is the property of every citizen.

In my view the failure and or refusal to account for the colossal and unprecedented expense of the CL Financial bailout is indicative of a ‘Quiet Coup‘ against our Republic.  I am deliberately borrowing Simon Johnson’s potent phrase, used to describe the coup of Financial Capital against the USA published in a fascinating and essential article from The Atlantic.  The fact that two successive administrations have remained bound to these arrangements and the low priority given to transparency and accountability in this matter all speak to the potency of the plotters.

“Emerging-market governments and their private-sector allies commonly form a tight-knit—and, most of the time, genteel—oligarchy, running the country rather like a profit-seeking company in which they are the controlling shareholders… As masters of their mini-universe, these people make some investments that clearly benefit the broader economy, but they also start making bigger and riskier bets. They reckon—correctly, in most cases—that their political connections will allow them to push onto the government any substantial problems that arise.”
—Simon Johnson. “The Quiet Coup” in The Atlantic. 2009.

The CL Financial group was able to use its considerable political clout and financial footprint to achieve a binding agreement that our Treasury would be used to pay its debts.  Absolutely unprecedented and all negotiated in less than three weeks, we are told.  That is the official version of this astonishing story.

Given the likely existence of a ‘Code of Silence’ in this tangled affair, I have been making use of the Freedom of Information Act in my campaign for transparency and accountability in the CL Financial bailout.

If we are ever to start to untangle this web of deceit and betrayal, we must get details of who got their money out, how much, on what terms and when.  On 8 May 2012, I applied to the Ministry of Finance via the FoIA – from which the Central Bank is exempt – to request this information –

Read the Newsday’s laconic report on this matter here.

The Ministry replied on 14 August to say that the information requested is likely to be exempt and I am now challenging them in Court.

For all we know, some of the people on the Ministry’s list of persons who have been paid could be the same ones protesting via the various Policyholders’ Groups.

To quote Cabinet Minister Devant Maharaj in October 2011, as part of the ongoing campaign on the Secret Scholarship Scandal:

Maharaj said yesterday that he rejected Williams’ claim thatthen prime minister Patrick Manning’s handwritten note on one of the applications for the matter to be handled quietly was ministry protocol, as was claimed by Yuille-Williams. “It seems as if this was the overriding motto for the disbursement of these funds,” Maharaj added. “This was a blatant attempt to hide the facts from the glare of public scrutiny.”

At this time the Ministry of Finance is publicising the end of the CL Financial bailout so that all the Public Money spent on this can be repaid and there are various official reports of how this is to be achieved.  At the very same moment, the said Finance Ministry has engaged a high-powered and expensive legal team, headed by Russell Martineau SC, to oppose my attempts to have the basic information published.

That is today’s Treasury Scandal. 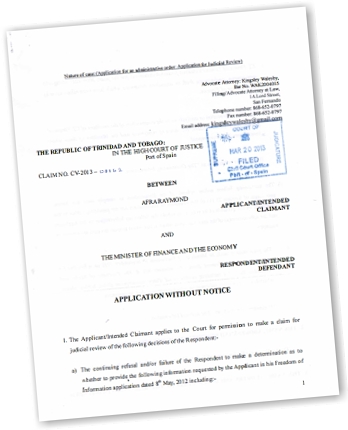 This is my filing for the Judicial Review of the continuing refusal of the Ministry of Finance to reply to my Freedom of Information request of 11 May 2012 along with my sworn affidavit.

The case is a critical challenge to the detrimental notion that $24Bn of Public Money can be spent without Accountability or Transparency.  That notion does violence to any healthy conception of the Public Interest, so I expect this contest to be a sharp one.

“Power concedes nothing without a demand…”

“Sunlight is the best disinfectant!”

What is being pursued here is our right as citizens of a modern republic to the details of these huge expenditures of Public Money – the CL Financial bailout is costing some $24Bn, about $3.5Bn USD! – and the background to how critical legislative support is obtained.  It is my view that S.34 was not the first time and that the spectre of ‘regulatory capture’, which underlines much of the discourse around the Great Depression 2, is in fact founded on a sinister degree of ‘legislative capture’.

Having had a series of ‘cat and mouse’ exchanges with the Ministry of Finance since my Freedom of Information Act application made on 11 May 2012, this is my pre-action protocol letter sent to them by my attorney on Thursday 7 March, seeking their proper reply in 7 days…that time expires at midnight today, Wednesday 13 March, so stay tuned, because we are going to the High Court after that…

Afra Raymond chats with Fazeer Mohammed on the Morning Edition show giving a year end wrap up of issues including the Colman Commission and The CL Financial bailout. Video courtesy TV6

This downloadable document is the 3rd April 2012 affidavit of then Minister of Finance Winston Dookeran, filed as the key evidence in the government’s case in reply to the High Court challenge mounted by Percy Farrell on behalf of a group of CLICO policyholders.

It is an important document since it is the official attempt to deal comprehensively with the claims that the new laws passed in 2011 to control the bailout were unconstitutional – those laws were the Central Bank (Amendment) Act, 2011 and the Purchase of Certain Rights and Validation Act, 2011. [To read the separate Bills progress in the House of Representatives, you can click here and here respectively.]

The most interesting ones are the paragraphs in which Dookeran states –

I used this last paragraph to obtain those quarterly reports from the High Court – this is the FoI application dated 2012-05-08 and Quarterly Reports for March 2012 and December 2011 cited.

There will be more to say on this, as we need to delve into the accountability framework in relation to this exercise.

This is the video of the segment from the show Making A Difference with Felipe Noguera called Caribbean Economic Forum. Appearing with guest Afra Raymond was David Walker, another prominent analyst on the CLICO debacle. Video courtesy Making a Difference

It is really instructive to consider the various arguments put forward by these parties in an attempt to limit my testimony and ultimately to deny it the benefit of clear illustration via PowerPoint.

There is going to be a real struggle to show the information on this series of financial and economic crimes.  That information needs to be shown in as digestible a form as possible, which was the point of my presentation.

Between the strong opposition of the parties who were at the centre of the crisis and the refusal of the government to fund multi-media facilities, we have a fight on our hands to get at the facts.