So, the campaign to save the Public Procurement and Disposal of Public Property Act (The Act) failed. The government achieved its objective of greatly reducing the oversight of the Office of Procurement Regulation (OPR). This is the final article in this series — I, II and III — so I pose two important questions arising from that failed campaign.

The first question really intrigued me. After all, if the current situation is one in which Public Procurement is loosely controlled, why would any government risk serious criticism by amending a law which has been delayed for so long?

END_OF_DOCUMENT_TOKEN_TO_BE_REPLACED

PREVENTION OF CORRUPTION IN PUBLIC WORKS AND PUBLIC PROCUREMENT AND CONTRACTING

“…:29. Promoting the inclusion of anti-corruption clauses in all state and public-private-partnership contracts…”
— From the Lima Commitment ‘Democratic Governance against Corruption’ made at the Eighth Summit of the Americas in April 2018, to which Trinidad and Tobago is a signatory.

Finance Minister Imbert responded at the post-Cabinet briefing on Thursday, 16 January 2020 to the pointed questions raised by the media on the unexplained delays in implementing the new Public Procurement system.  The Minister’s stated that he had only received a final position from the Office of Procurement Regulation (OPR) on 18 December 2019, which was too late to take action, given that Parliament had its last sitting for 2019 on 16 December. END_OF_DOCUMENT_TOKEN_TO_BE_REPLACED

Afra Raymond sits with Hema Ramkissoon on the Morning Brew to discuss the newly revealed public-private agreement to finance and build 5,000 apartment units in Port of Spain and San Fernando with China Gezhouba Group International Engineering Co Ltd (CGGC). Opinions on whether this is a good deal or not. Video courtesy CNC3 Television.

The current Government to Government (G2G) arrangements are a direct threat to our country’s fundamental interests.

The key element of the G2G arrangement is that a larger, more advanced, country will assist a smaller, less-advanced country by building or operating complex facilities which are beyond the reach of the smaller state.

One of the features the G2G arrangements have in common with the other large-scale projects is the high degree of secrecy with which the proposals are developed.  That secrecy raises doubts as to whether proper Needs Assessments are undertaken and as to the degree to which the views of citizens and stakeholders are sought, far less considered.  The fundamental issue as to the necessity for these projects is thus routinely sidelined, which is inimical to the public interest.

The main criticisms of the G2G arrangements are –

These arrangements have been heavily criticised in our country for almost 35 years, starting with Winston Riley’s October 1979 paper which identified many of the emerging problems.  As a result of that rising tide of criticism, an official enquiry was established by then PM, George Chambers.  In March 1982, the Ballah Report was published and the G2G programme was brought to a halt as a result of its dire findings.

Despite the learning, successive political administrations seem unable to resist the appeal of these G2G arrangements, so we have today’s situation as shown in the table.

The total cost of these projects is just under $8.4 Billion TTD.
That is the background, against which we must consider these further elements –

The PM has made a call for a National Conversation and this is one topic which needs addressing. Our country cannot continue exporting our jobs, capital and skilled people in favour of unexamined and undisclosed foreign policies.

Government to Government arrangements (G2G) are made between two states, so that the less developed one can benefit from the technology and methods of the more advanced one. Given the scale of projects now being undertaken via these arrangements; the current high-level State mission to China, with its key objective of deepening the strategic ties; the long-promised and impending Public Procurement & Disposal of Public Property law and our recent G2G experience, this a critical issue to delve into.

These G2G arrangements have been controversial since their introduction to Trinidad & Tobago in the 1970s, during the ‘petro-dollar boom‘. The Central Tenders Board Act was amended in 1979 to exclude both State Enterprises and G2G arrangements from what was seen as the heavy hand of bureaucracy. In that period, the most memorable projects done via G2G were the Mount Hope Medical Complex, the Twin Towers and the Hall of Justice. There were other projects, often shrouded in allegations of corruption and improper practice. After strong protests, the then PM George Chambers appointed the late Lennox Ballah to enquire into the entire series of G2G arrangements. The Ballah Report was published in March 1982 and it should be required reading for those who are committed to national development. Chambers accounted for the petro-dollar by reporting to a shocked nation that two out of every three dollars had been stolen or wasted. Most of the G2G arrangements were stopped after that publication.

Yet these damaging arrangements have now re-emerged and what is more, there does not appear to have been any fundamental improvement in our terms within the new agreements. Once again, despite the clarity of the Ballah Report and its publication, we do not appear to have the capacity to learn from our history. That is a fatal blind-spot in our society.

It is clear to me that G2G arrangements, as presently configured, are severely detrimental to our national interest. Supporters of G2G would say that those arrangements allow a more rapid pace of development at costs which can appear to be competitive.

The main criticisms of the existing arrangements are –

The previous administration entered a high-profile G2G arrangement with China to build the National Academy of Performing Arts (NAPA) in POS and San Fernando via a $100M USD loan. The fundamental injury this G2G did to the national interest was that it ceded effective control of the project to China, who exercised their rights by awarding these two huge Design & Build contracts to Shanghai Construction Group (SCG). The POS NAPA was a highly-controversial project, executed via UDECOTT, with Peter Minshall reportedly stating that the buildings looked like ‘copulating slugs‘. Many allegations were made against local designers, contractors and workers as the pressure mounted on the Manning administration.

We know that the design errors are legion at NAPA POS, arising mostly from the lack of consultation with user groups and the public. The costs of sidelining a proper consultation process are high, so this is a vital case-study of the heavy impact of those detrimental arrangements.

Strong protests were raised in the Parliament by the then opposition against the NAPA deal. Those people are now in government, the previous administration having suffered a heavy electoral defeat in what seemed to me to be a public rebuff at these kinds of arrangements.

But the real lesson for us here is the extent to which our national interest has been wounded in that the ability to renegotiate appears to have been compromised. Just consider that the incoming PP administration was obliged to ‘fall-into-step’ when expensive remedial works were required in 2011, which was the second year since NAPA (POS) was opened. In September 2011, the State took a further $210M loan from the Export-Import Bank of China to carry out remedial works at NAPA POS, those works to be done by the original contractor, Shanghai Construction Group. The normal procedure is for remedial works to be for the contractor’s account, but these G2G arrangements are not normal. Having been sidelined by the original project, our local designers, engineers, bankers, contractors and skilled trades-people were once again displaced by foreign interests.

What is worse, the original projected cost for NAPA (both POS & San Fernando) was said to be $100M USD and it was later disclosed that NAPA POS cost $500M TTD, before the remedial works of $210M. You see?

One would think that with the high cost of remedial works at NAPA POS having been revealed in September 2011, the present administration would have been cautious in embracing these G2G arrangements. But no, it did not

On Friday 2nd March 2012, the PM turned the sod for the Couva Children’s Hospital, to be built under a new series of G2G arrangements with China. The PM’s address contained a clear message as to the restoration of these arrangements to acceptability –

That was the first direct, high-level statement by the Peoples Partnership administration on this critical development issue. The contractor selected by China was the said Shanghai Construction Group. But there was more.

In March 2013, Newsday reported that “…Government and the EXIM Bank of China yesterday signed a $1.8 billion loan agreement for the construction of the children’s hospital and three national sports facilities in Couva, and three multi-sports facilities in other parts of the country…”. Furthermore, according to that report “…The contractor for the projects is the Shanghai Construction Group of Companies, which Zhu said ‘is one of the best construction companies in China. We believe that under Shanghai, the two projects will be completed on time with the quantity and quality of work required of them guaranteed,’ he said…”. Clearly, SCG seems to be a highly-favoured firm of contractors.

There are serious issues of the Public Interest being negotiated and compromised in these large-scale and highly-secretive G2G arrangements. The JCC has repeatedly called for a complete re-examination of these arrangements so that the critical issues of national development can be properly advanced. The 42nd and 43rd recommendations of the Uff Report speak directly to these burning issues.

The new Public Procurement and Disposal of Public Property law must include for proper scrutiny of these large-scale G2G arrangements. The government of the day has the right to enter into arrangements with its diplomatic partners, there is no doubt as to that. These G2G arrangements must be conducted in accordance with proper norms of transparency, accountability and consultation, so that value for money can be achieved. Our country has a poor record in this area. We must do better.

This is the interview on Caribbean Corruption for ‘Time to Face the Facts‘ which was broadcast out of Barbados-based Caribbean Media Corporation on Sunday 26th May 2013.

The audience was regional via cable and global via their Facebook page. The interviewer is Jerry George and the format was a live call-in. Video courtesy Jerry George

END_OF_DOCUMENT_TOKEN_TO_BE_REPLACED 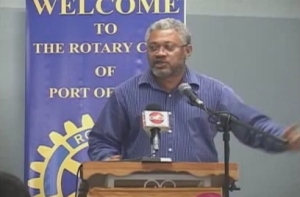 On Tuesday 24 April 2012, JCC President Afra Raymond addressed the POS Rotary Club at their luncheon on ‘The Imperative of Public Procurement – The Government to Government Arrangements‘ – the Power Point presentation is shown here.