PREVENTION OF CORRUPTION IN PUBLIC WORKS AND PUBLIC PROCUREMENT AND CONTRACTING

“…:29. Promoting the inclusion of anti-corruption clauses in all state and public-private-partnership contracts…”
— From the Lima Commitment ‘Democratic Governance against Corruption’ made at the Eighth Summit of the Americas in April 2018, to which Trinidad and Tobago is a signatory. 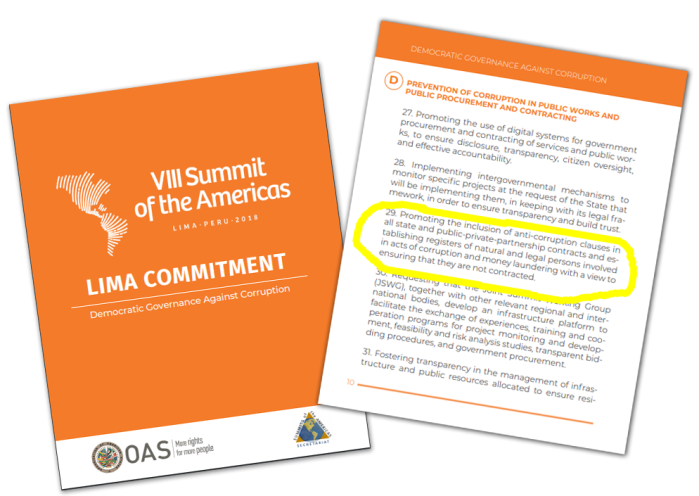 Finance Minister Imbert responded at the post-Cabinet briefing on Thursday, 16 January 2020 to the pointed questions raised by the media on the unexplained delays in implementing the new Public Procurement system.  The Minister’s stated that he had only received a final position from the Office of Procurement Regulation (OPR) on 18 December 2019, which was too late to take action, given that Parliament had its last sitting for 2019 on 16 December.

I fully support both positions taken by the OPR in these important matters.

Minister Imbert also explained that the OPR’s proposed amendments on disposal of public property, with which the government agreed, as well as its position on the G2G and PPPs, with which the government did not agree, were to be taken to Parliament for debate at the earliest possible opportunity.  Given the commitments on the legislative agenda, that debate is anticipated to be in early February 2020.

Based on the information coming to me, it seems clear that the OPR confirmed both those positions to the Finance Ministry prior to 18 December 2019 and more than once.  That is my view of the matter thus far, so these issues now require our utmost vigilance if we are to achieve the intended transformation from the full implementation of The Act.

The situation with the G2G and PPPs is seriously conflicted, with the OPR wanting to retain its supervisory role as per The Act, but the government claiming that those provisions would be inimical to those arrangements.  As I set out in the sidebar, the benefits of G2G arrangements are not as positive as one would think, given the widespread adoption of that approach.

Minister Imbert raised the probability that international lending agencies and other countries would be deterred if our Procurement laws were applicable to those transactions, with adverse effects on our national interests.  I do not accept that conclusion, since implementation and operation of The Act has been widely consulted on with stakeholders, including international agencies, with none of those concerns having emerged.  These are late concerns emerging only from the government, supposedly on behalf of seasoned stakeholders who raised no such concerns.

The existing provisions of The Act in this regard are at S7 and those are in proper alignment with international norms, so what is this sudden concern?  The Minister needs to provide those details, so I am awaiting the upcoming debates on this important matter.

These G2G arrangements were claimed by Minister Imbert to be of tremendous importance and of that there can be no doubt, given the sheer scale of these projects.  To list just a few:

Even against that background of substantial projects completed under G2G, it is not at all clear that those arrangements have been of overall or net benefit to our country.

The main criticisms of the G2G arrangements are –

These arrangements have been heavily criticised in our country for almost 35 years, starting with Winston Riley’s October 1979 paper which identified many of those emerging problems.  As a result of that rising tide of criticism, an official enquiry was established by then PM, George Chambers.  In March 1982, the Ballah Report was published and the G2G programme was brought to a halt as a result of its dire findings.

Yet, despite the learning, successive political administrations seem unable to resist the appeal of these G2G arrangements, so we have today’s situation with bold-faced claims being made as to benefits with no steps having been taken to address any of the huge problems identified over 40 years ago.