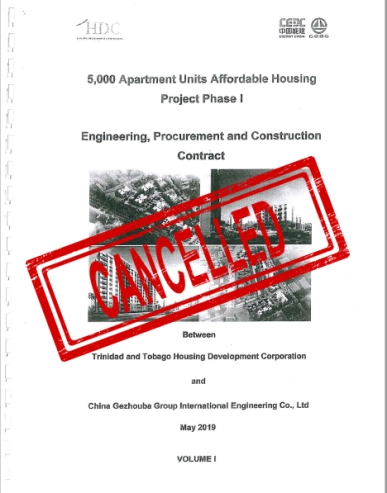 The previous article opened with news of the unexpected and welcome cancellation of the huge HDC/CGGC contract to design and build 5,000 new apartments.

The barrage of stories on this issue in the last week has left one phrase ringing in my mind, VS Naipaul’s sardonic wit in his ‘independence novel’, A House for Mr Biswas – “…amazing scenes were witnessed when…”.

First, we must attend to the clear statement by Housing and Urban Development Minister Major-General (Ret’d) Edmund Dillon asserting that the contract with CGGC was one in which that firm was to finance, design, procure and construct the housing blocks and the associated infrastructure for these developments.

The documents now published by HDC show that the financing cost was to be borne by the State, together with other important approval and security risks.

So it is natural to ask whether the Housing and Urban Development Minister simply did not recognise what he was seeing; took bad advice or was this all a scheme to bamboozle the Public?  The questions are painful, but necessary, so what is the answer?

Worse yet, was the AG’s two astonishing statements, both reported on Tuesday, 10 September 2019, in which he wondered ‘Why the fuss over axed HDC Chinese project?’ (Trinidad Guardian pg A7) and even ‘Sando high-rise apartment project on track, says AG’ (Daily Express pg 10).  I am simply unable to get past those disdainful declarations, given the PM’s clear statement that Cabinet had cancelled the contract.

It was reported in Newsday of Friday, 13 September 2019, ‘JCC: tender needed for public housing deal‘ that the HDC had also issued a statement that the project would continue.  Well I tell you.

Other commentators were equally perturbing, seemingly unable or unwilling to engage the inescapable issue of the unaffordability of these new homes.

Anthony Wilson wrote an extensive analysis ‘Govt faces multimillion claim from Chinese firm…but no liability if inducement was paid’ in last week’s Express Business.  Given the circumstances, I consider both possibilities remote to the point of virtual invisibility.  CGGC is unlikely to make a formal claim, since that approach seldom arises in Government to Government Arrangements, and the State, faced with such a claim, will be reluctant to introduce evidence of bribery and so on.

Former PNM Minister, Mariano Browne, wrote a factual and informative article ‘Doing business in T&T?’ in the Guardian of Thursday, 12 September 2019 (pg A16) in which he made the important point that by effectively contracting-out of the risks of late payment, delayed approvals and security, the CGGC negotiators had taken reasonable steps to insulate their firm from those serious risks.  The decisive question remained unasked – ‘Given that all those risks had been ‘contracted-out’, why is the rate so high?’  The CCGC rate is an estimated 30% more than local contractors charge.  Why?

Finally, some have been saying that this episode is proof that our State Agencies are not up to the task of negotiating with the private sector, but the fact is that CGGC is also a State-owned enterprise.  So what we are seeing here is that the Chinese negotiators were able to identify and achieve positive results for CGGC, while ours seemingly agreed to everything.  That contract was so one-sided that I find myself wondering if we were able to achieve any of our objectives in those negotiations.  I don’t give the Chinese negotiators wrong, the pity is that we seem to be unable to find negotiators of that calibre in our Statutory authorities and State Agencies.

Sad to say, but this is all reminding me of that Tobago Sandals MoU, for whatever reason.

ADDENDUM I: The Affordability issue

In 1970, Keith Rowley, not yet Dr., stayed at Coconut Drive in Morvant at his mother’s home, which was built by the NHA (predecessor to the HDC), that is at pg 35 of Dr Rowley’s autobiography ‘From Mason Hall to Whitehall’.  According to the book, that lady was working as a cook at the Breakfast Shed, yet she was able to afford a new NHA home.  That was the pricing in place at that time, 50 years ago and before the oil-boom.

Yet, after sharp and unexpected increases in national income, we are seemingly unable to devise large-scale housing affordable to our citizens in humble jobs.  Maybe we are simply unwilling or just disinterested and maybe our poor have now been banished to obscurity, but that failing is serious one.

ADDENDUM II: The role of local professionals and contractors

This issue was seriously contested at the Uff Enquiry into the Public Sector Construction Industry, at pg 52, its initial findings were –

Most of our large-scale housing projects were constructed by local professionals and contractors – Trincity; Edinburgh 500; Plaisance Park; Bonair Gardens; River Estate; the northern part of Diamond Vale; Oropune Gardens to name just a few.  The question therefore has to be – ‘Why are we now, in the face of that learning from the Uff Enquiry and the tangible track-record, seeking foreign contractors to do our large-scale housing?’