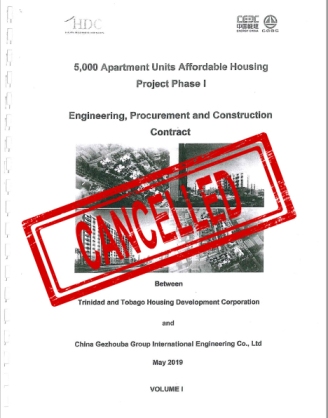 The previous article opened with news of the unexpected and welcome cancellation of the huge HDC/CGGC contract to design and build 5,000 new apartments.

Sad to say, but this bitter, bizarre HDC/CGGC contract and its reported cancellation requires that my Season of Reflection closes with further, more blatant, counterfactuals.  Last week I quipped about the amazing scenes we were witnessing in this episode, but the more recent statements denote a sharp descent.

This recent barrage was an epic of Carefully Crafted Confusion.

For example, the important issue of whether the Attorney General advised on the contract has been serially evaded.

“...Mr. Indarsingh: Thank you, Mr. Deputy Speaker. Can the Acting Prime Minister state whether this contract for over half a billion dollars was vetted by the Attorney General of Trinidad and Tobago?

Mr. Deputy Speaker: I will not entertain that question at this time, Member…”

“…Mr. Rodney Charles (Naparima): Thank you, Mr. Deputy Speaker. Can the Acting Prime Minister state whether any due diligence by the Office of the Attorney General was undertaken prior to the signing of the Framework Agreement between the China Gezhouba Group International Engineering Company and the Housing Development Corporation on July 13, 2018?

The Acting Prime Minister and Minister of Finance (Hon. Colm Imbert): Mr. Deputy Speaker, I am advised that the framework agreement did not require the Attorney General to give an opinion on the contract.

Mr. Charles: Thank you, Mr. Deputy Speaker. Is it the norm for state enterprises to enter into contracts in the order of this magnitude without reference to oversight by either Cabinet or the Attorney General?…

In the first case, the Deputy Speaker refused the question and in the second, the Acting PM simply said that the AG’s advice was not required.  As yet, we have no idea if that advice was sought and provided.  Did the AG advise?  Yes or no?

Another aspect of this is that, as a Statutory Corporation, HDC is governed by its Act, which states at clause 12  –

“…12. The Minister may give to the Board directions in writing of a specific or general nature to be followed in the performance of its functions or the exercise of its powers under this Act, with which the Board shall comply…”

Clearly, HDC is legally bound to comply with any lawful instructions from its line Minister, so any statement to imply its independence is simply false and misleading.

“…We didn’t put Newman George to run the HDC…” is a perfect counterfactual, since the HDC Board is appointed by Cabinet, of which the PM is Chairman.

On 3 December 2015, the government news service advised that ‘Housing Minister appoints new HDC Board’, inclusive of its Chairman, Newman George.

I was intrigued by these parts of Dr Rowley’s statement –

“…The PM said Cabinet was unhappy with some aspects of the contract, including a conflict between the plan to sell apartments (which people may not be able to afford) and Cabinet’s desire to build rental units. He also lamented the old deal would have required the HDC to get help from several ministries and may have been too accommodating to a foreign entity…”

Could it be that we will see a move towards affordability and rental units?

Apart from the awkward phrasing, that is sound.

So far so good, but there is more.

The contract contained two payment guarantees.  The first, in which the HDC guaranteed the full sum due to CGGC, and in the second of which HDC guarantees the retention held in respect of defects etc.  Both those guarantees specify –

“…This guarantee shall be governed by the laws of the People’s Republic of China and shall be subject to the Uniform Rules for Demand Guarantees, published as No 758 by the International Chamber of Commerce…”

Given that our Public Money was to fund this huge project and support these guarantees, it is  unacceptable that the governing law was not our own. Quite apart from the issue of the governing law, it is striking that these solid guarantees are seldom, if ever, enjoyed by local contractors.

ADDENDUM: Who signed what? 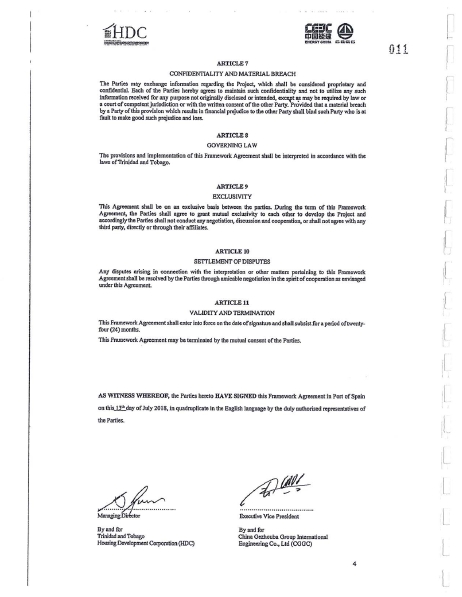 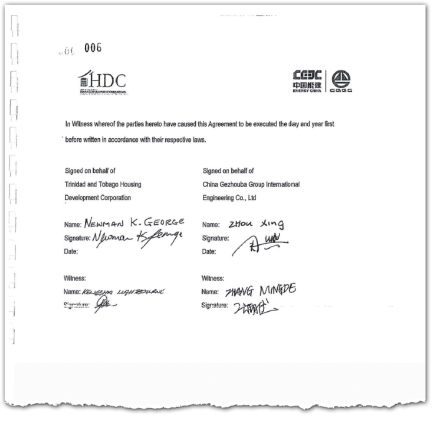