The previous article set out my criticism of the CLF bailout situation in respect of the CARICOM claims and our nation’s treaty obligation to exercise non-discrimination in its policies. In that light I am sceptical of the position now being advanced by the CLF shareholders to highlight that group as being a black-controlled conglomerate. My scepticism was rooted in the apparent refusal or failure of either the CLF shareholders or the T&T State to accept responsibility to meet CARICOM claims arising from the 2009 collapse of CLF.

I am stating here what seem to be the four indispensable elements of an equitable settlement to this CLF bailout.   END_OF_DOCUMENT_TOKEN_TO_BE_REPLACED

The meaning of the PM’s speech of 27th July 2017 was truly sobering. 27 July was the anniversary of the Muslimeen coup, the 27th anniversary, as it so happens. This might look like a mere coincidence, but stay with me here.

Dr Rowley told us that the CL Financial group, which has been under the direction of a State-controlled Board since 2009, was either not in control or themselves culpable in this serious situation now upon the country. The failure to keep proper audited accounts and the issue of the alleged diversion of Angostura’s dividends, all add to the impression of a huge, out-of-control entity operating to our collective detriment. It also seems from that statement that the only substantial repayment of CLF’s debt to the State was the $7.5 Billion earned from the sale of shares in Methanol Holdings Trinidad Ltd. Where did the hefty dividends from Republic Bank Ltd go? END_OF_DOCUMENT_TOKEN_TO_BE_REPLACED

This title denotes the search for truth and the meaning of that truth. The main issue to be confronted this week is the attempt to once again create an alternative narrative, this time in relation to interest charged on the Public Money spent in this bailout.

Every year, I observe The Season of Reflection, between Emancipation Day on 1st August; Independence Day on 31st August and Republic Day on 24th September. There appears to be a meaning in the sequence of these holidays in terms of both the years and dates. Some notion of progress from the barbarism of Slavery to the undignified bad-old days of Colonialism to the better days we now experience as citizens of a Republic. But that progress did not come just so, there had to be real pressure for change.

Searching for progress and understanding requires us to go deep, even if only for a spell, hence The Season of Reflection.

This Season opens at a charged moment in the riveting CL Financial bailout, which I described last week as a bold-faced snatch-and-grab. Of course I was referring to the attempt by the shareholders to regain control of the CLF group without a binding agreement in place to ensure repayment of the $15 Billion in Public Money spent in this bailout. END_OF_DOCUMENT_TOKEN_TO_BE_REPLACED

Please see attached a Joint Media statement from Mr Afra Raymond (www.afraraymond.net), Mr David Walker and myself Rishi Maharaj (CEO Disclosure Today). “The more you know, the more you know you don’t know.” This quote seems to epitomize the current scenario the country is facing regarding the CL Financial fiasco. Over the past eight and a half years each of us in our own capacity have made several requests for financial information regarding the bailout.

It is therefore our view that in the best interests of protecting taxpayers, it is clear that the government should immediately lift the veil that they erected and be open with the public.
Regards,
—
Rishi Maharaj
Chief Executive Officer
Disclosure Today
http://www.disclosure.today | rishi@disclosure.today
120 Abercromby Street
Port of Spain, Trinidad and Tobago

This is my 17 July 2017 ‘Morning Brew’ interview with CNC3’s Hema Ramkissoon on the continuing drama that is the CL Financial bailout. The “chess game” for control is active at this moment, but the propriety of a wholesale return of the group to those chiefs who brought the company to its knees in the first place is still to be debated. Video courtesy of CNC3 Television.

In today’s world of ‘Alternative Facts’ we have to be alert to the special dangers posed by ‘False Equivalence’. False Equivalence arises when two arguments are presented as being of equal relevance, but in fact one is solidly fact-based and the other is mere speculation or invention. Those dangers are especially present in matters of public importance, as recent events have shown.

Tony Rakhal-Fraser’s Sunday Guardian column on 25 June 2017, titled Appointing ‘Fit and Proper’ People, made me wince, despite his usual high standard of writing. My reaction arose from what appeared to be an attempt by the Central Bank Governor to promote a new discussion on the fit and proper rules. END_OF_DOCUMENT_TOKEN_TO_BE_REPLACED

Central Bank replies to our open letter of 31st January 2017 on the CL Financial bailout.

On 31st January 2017 I co-signed an open letter to the Central Bank Governor on the CL Financial bailout. My collaborators were Rishi Maharaj of Disclosure Today and David Walker, with our common purpose to pointedly question the Central Bank’s handling of the bailout.

When over two months passed without a reply or acknowledgment, we decided to act again to bring the issues forward. On 19th April 2017, we delivered the letter again to the Governor’s office, this time with media coverage.

That approach seems to have worked, since the Central Bank actually replied on 21st April 2017 – see attached.

Of course there is no real reply to our queries, so we will be doing a thorough reply on those issues.

CORRECTION: On the issue of interest due on Public Money advanced for the CL Financial bailout

I have been stating that the Public Money advanced for this CL Financial bailout has been interest-free and that was a clear indication of the most-favoured status of the borrowers. With apologies to my readers, I now accept that 4.75% was charged on the first tranche of $5Bn which was lent in 2009, so my prior claim needs to be withdrawn – see comments below. Yes, interest was charged on the bailout monies but at such a paltry rate as to leave my fundamental point undisturbed, as explained below.

The Weighted Average Cost of Capital (WACC) is a metric used to show what is the average cost of the capital raised by a company. It is a vital tool in strategic management and allows the company’s leaders to make effective borrowing decisions. For example, a company which had borrowed half of its capital at 10% and the other half at 14%, would have a WACC of 12%.

If we apply this approach to the CL Financial bailout the answer is instructive. So, we can assume that the total advanced is $25Bn – there are many estimates floating out there, but $25Bn is recurs quite frequently – with only 4.75% being charged on the first $5Bn and no interest on any more of the Public Money advanced to CLF. According to my calculations, given that only 20% of the CLF bailout pays interest at 4.75% and the other 80% is at zero-percent, the WACC is .95%, less than 1% is the interest due from the CL Financial chiefs for this epic loan. I tell you. It really looks like those insurance and investment gurus had it right, eh…party political investment is really the best insurance policy.

Having said that, the two questions arising are still of high importance –

That rate is significantly less than the mortgage rate at that time, so how and why did a distressed borrower qualify for that kind of favour? 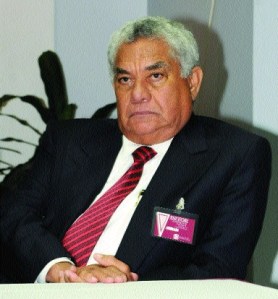 The return of Lawrence Duprey was the Sunday Express lead story on 15th January 2017 – ‘Rebirth of Duprey‘. This is one of those times when one is really sorry that an original suspicion was true.

We seem to be striding straight toward a precipice with no clear information at all about why, or how. The largest-ever special interest deal now seems set to return CL Financial to Lawrence Duprey and his cohort, which will be hugely detrimental to the public interest.

These bailout conditions in no way resemble the Wall St examples, despite the comical claims of its defenders that it was the same thing. There are three important differences –

Those terms were agreed by the Cabinet in January 2009. It is a real ‘sweetheart deal’ to assist Mr Duprey and his cohorts to a soft recovery so they could get back control of the companies when things improved. We are now reaping what our rulers sowed, hence the title of this article. END_OF_DOCUMENT_TOKEN_TO_BE_REPLACED

30th January is the anniversary of the infamous 2009 CL Financial bailout, so I collaborated on this open letter to the Central Bank Governor, Dr Alvin Hilaire, to raise some urgent and important questions on the Central Bank’s management of this situation.

Our letter was sent on 31st January 2017 and was signed by David Walker, Disclosure Today and I.

Please read this and spread the word…

Silence is the Enemy of Progress! 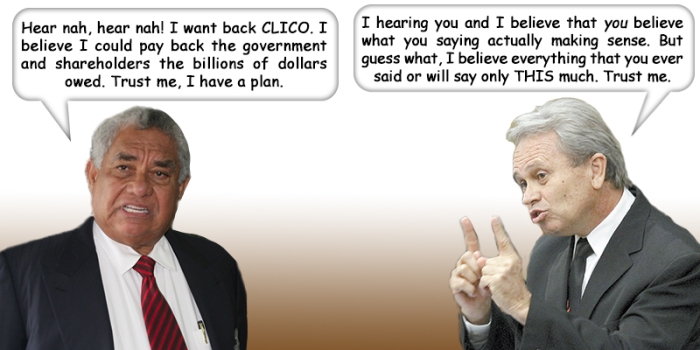 On Sunday 22nd May 2016, the front-page story in this newspaper was headlined ‘We will pay it back‘. That article featured very interesting quotes from former CL Financial Executive Chairman, Lawrence Duprey as well as the Minister of Finance & the Economy, Colm Imbert, on the prospects for repayment of the huge sums of Public Money spent on this CL Financial bailout.

Duprey claimed to have made a formal proposal to the State to repay taxpayers and all stakeholders who are owed money, while insisting that the amount owed was yet to be determined. The failure or refusal of the State to publish any audited statements in relation to this CL Financial bailout appears to be impeding the discussions as to a settlement of this massive debt. The sidebar contains a summary of how the Public Money spent on this bailout has grown from the initial 2009 estimates of $5 Billion to a 2016 figure now said to exceed $24 Billion. END_OF_DOCUMENT_TOKEN_TO_BE_REPLACED