This is a continuation of my examination of the National Housing Policy (2002), its implementation and the associated implications.

Over the last year I engaged with HDC’s management who cooperated with me, much like the previous team. I asked about new homes produced by the National Housing Authority (NHA) and the Housing Development Corporation (HDC) in the period January 1st 2003 to December 31st 2015 to establish a) the output of completed homes; b) numbers of new homes distributed; c) the tenures of those homes and finally, d) compliance with the allocation criteria established by the 2002 policy. 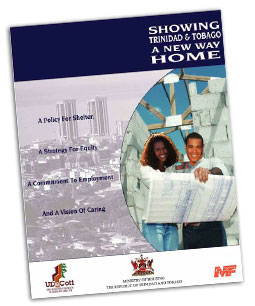 The 2002 policy is “Showing Trinidad and Tobago a New Way HOME” and it seems to have met the sorry fate of the 1992 national land policy, in that those important policies have both vanished from official websites. The headline of that Policy was the target of 100,000 new homes in ten years. That target was over-ambitious, given the bottlenecks in our system of planning and construction, even if, at that time, ‘money was no problem’.

A fundamental aspect of public housing policy is ‘How do people get those new, heavily subsidised, homes?’. The allocation policy is intended to secure elementary equity in who gets these scarce public resources. It is a key benchmark in measuring if objectives are being met.

The HDC is claiming to have kept no records of the housing allocation policy, which is a recipe for inequitable distribution. We are being asked to accept that HDC uses a unmonitored allocation process, something resembling the ‘bran tub’ Mr Imbert was so critical of when in Opposition.

I do not accept that HDC has no records of its allocations and they should now release whatever information is available.