The recent official statements about a proposal for a Sandals Resort in Tobago are significant, given both the convulsions in the Tourism portfolio and the urgent need to diversify our economy away from its long-term dependence on energy earnings. This is a preliminary view of some of the relevant considerations, since the sparse details now available do not permit a critique.

The various official statements outline that Sandals are in discussions with the State towards a new 750-room resort to be located in Tobago, which would both increase the overall room stock and bring collateral benefits if it proceeds.

Some of the main considerations are –

At this point, it is useful to consider the costs of the model in which the State builds and refurbishes the hotel properties.

In keeping with the way in which we discuss project details, these are construction costs, which do not include land or the cost of finance.

Some important points of background put some context to these projects –

A petition has been launched on change.org to seek the details of the proposed arrangement with Sandals.

Finally, one has to consider just what are the lessons learned from these experiences. At this point it is not clear to me why the Tobago Hilton failed. That is a sobering gap in our knowledge, given that as a large resort it is the closest to the current Sandals proposal now under discussion. How can we properly engage the new and critical negotiations without that kind of detailed understanding?

The introduction of a huge Sandals resort to Tobago would surely accelerate the rate of change in our country and there are a number of interlocking issues to be reconciled. This would be a huge project, with a cost likely in excess of $1 Billion TTD, so the stakes are very high at that initial stage. The design and construction of the resort is expected to take three years and a series of opportunities on that scale would be of great interest to the beleaguered construction industry. Can we achieve a high level of local content in the Tobago Sandals project? If the State is paying, it will be a huge expense on a seriously strained public purse and there will be no case for any tax concessions. In the alternative, if the resort is built at Sandals’ expense, they are likely to demand significant tax concessions as is the accepted pattern elsewhere.

The underlying, seldom-disclosed, commercial arrangements drive projects of this type, so that is where our attention is demanded. 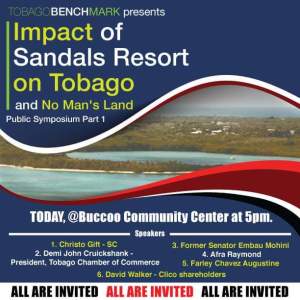 Tobago Benchmark hosted a symposium on the “Impact of Sandals Resort on Tobago and No Man’s Land” on Thursday 18th August at the Buccoo Community Center. Afra Raymond was one of the guest speakers, focusing his talk on the “underlying commercial arrangements” which no one likes to talk about. Examples throughout the Caribbean are seemingly secret, but there are examples from the Trinidad and Tobago that can set a context for what is important as well as what is interesting. Video courtesy Tobago Benchmark.

On 10th August 2016, UDECOTT published a request for Expressions of Interest for the Design, Finance, Construction and Operation of a luxury hotel on the site of the Ministry of Agriculture at St Clair Circle in north POS. That raises two important questions in relation to the Sandals Tobago matter.

To me, it signals that our reduced financial circumstances do not permit that level of investment, which implies that T&T will be offering substantial tax concessions to Sandals, if the project proceeds.