The escalating episode of the apparent conflict between the oversight of Parliament and the Courts in this matter is a real learning experience for us all. I am clear that the Speaker spoke on Friday 23 January 2015 with the intention to convey that the High Court had sent him an official Notice which was decisive in the conduct of the business of Parliament.

Here is the contentious sentence of Speaker Wade Mark’s statement –

…I received only a few hours ago a notice from the High Court of the Republic of Trinidad and Tobago dated January 16, 2015, a matter involving Larry Howai and Azad Ali of the Sunshine Publishing Company Limited…

It seems very clear to me what the Speaker intended to say. Of course we now know that the statement was baseless and misleading. Misleading in the extreme.

“…While there appears to be some misunderstanding which we expect the Honourable Speaker of the House to clarify, the Judiciary can confirm that no Notice, letter or any other communication on the matter was forwarded by the Court or any of its officers to the Speaker or any officers of the Parliament…”

How many people believe that the Speaker would have attempted to clarify, for that is all it was, if the Judiciary had said nothing?

In November 2013, Wade Mark threatened to sue the Trinidad Expess over its articles on the controversy surrounding the award of an Executive Masters in Business Administration (EMBA) to him by the Arthur Lok Jack Graduate School of Business (ALJ-GSB). I have heard nothing more about that lawsuit.

That episode was one with very serious allegations of improper conduct of examination processes at the ALJ-GSB, which allegedly culminated in the award of the EMBA to the Speaker of Parliament, Wade Mark.

I was very concerned over that series of allegations, given the potential impact on the reputation of the UWI, the ALJ-GSB and ultimately, the very reputation of our Parliament, if they were proven to be factual. Most unacceptable was the silence coming from the Speaker on the central issues – Was it true that the Speaker had scored 91% in the Management Accounts exam? Had the Speaker been allowed more chances than usually permitted in those exams? Had the Speaker really written to the ALJGSB on his official letterhead? If so, why?

I confronted Mark directly the next time we met, which was on the grounds of the Parliament on Tuesday 3 February 2014. After a heated exchange, during which he told me that his performance in mathematics had always been weak, Mark declined my urging to clear the air on those serious concerns and took the position that his degree had been awarded by the ALJ-GSB.

It would really be useful if the ALJ-GSB could publish the range of marks for that MBA-level Management Accounts final exam, so that we could assess the frequency with which marks over 70% are achieved.

When Parliament sat on 23 January, the first item on the Agenda of the Private Members’ Day was the no-confidence motion against Larry Howai filed by Jack Warner. The Speaker gave everyone the impression that the High Court had sent an official Notice to Parliament and never mentioned that in fact he had received those documents as part of a correspondence from Senator Larry Howai, Minister of Finance & the Economy. That Notice was said to relate to the litigation between the Minister and the Sunshine Newspaper on the financing by State-owned FCB (which had been headed by the Minister during that period) of the Carlton Savannah Hotel in Cascade. That presentation was very misleading and raised the genuine issue as to whether Members facing potentially embarrassing questions in the House had discovered a novel way to seek the protection of the Courts.

Before inviting Members to speak, the Speaker issued a clear caution –

…And in those circumstances, unless the Member who is about to speak can tell this House that what he is about to say is not going to be in any way, adverse, to what is before the High Court of Trinidad and Tobago, I would have to deny this Motion although it has been approved…

Ultimately, Warner relented and effectively withdrew his motion.
The Timeline in the Sidebar sets out the sequence of events and it is a stark example of how the Parliament and the Courts have become entwined in this latest rounds of the Silly Season.

The worse part is the third statement, made on 30 January 2015, which did little to restore confidence. It seemed that the Speaker’s was attempting to reverse his earlier clear caution to the House, claiming that –

…I wish in closing to ask Honourable Members to note that after I brought to the attention of the House the existence of the said legal proceedings, in exercise of my discretion as the Presiding Officer, I permitted debate on the motion to commence. I did not deny or shut down debate on the motion. It was the mover of the motion who, of his own volition, after he commenced his contribution, decided not to proceed…

It is true that Mark did not directly rule that the debate had to be halted, but his caution effectively shut-down the debate. That caution was based on a false statement and omitted the critical fact that the party to the debate was in fact invoking the Sub Judice principle.

At this point, I am still unclear. If Speaker Mark is in fact saying that he had no objections to the motion being debated, then that debate should be reconvened at the earliest possible sitting. The stream of letters which are beneath this disturbing sequence of events must be published, the sooner the better.

The position of Senator Howai is also inexplicable. Howai and Leader of Government Business in the House, Dr. Roodal Moonilal MP both claim to have been ready to debate the motion. So why send the letter to the Speaker?

This is real mind-games with the peoples’ business, I hold no brief for Warner or any of the other Members, they are all capable of seeking their own interest. The issues of the Carlton Savannah Hotel financing seem to be serious ones and we need to insist that the debate is started at the earliest opportunity. Some points on that issue are in the Sidebar.

I am not calling on the Speaker, or anyone for that matter, to resign. The Speaker can start to restore this situation by publishing those letters and convening an early debate on Warner’s motion. 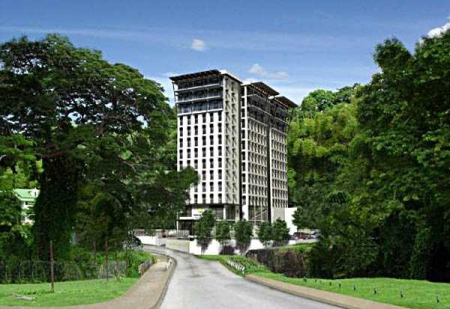 It has been reported that FCB is owed over $400M borrowed for the construction of this elegant hotel on the outskirts of the Queen’s Park Savannah. That hotel is now up for sale via the receivers, Deloitte, at an asking price in the region of $120M.

The key issue evident here is the huge impact of the Hyatt Hotel on its POS rivals since its opening in early 2009. A combination of its virtual monopoly of State functions and the imperatives imposed by how it was funded have made Hyatt a unique hybrid, being at once the most elegant and most economic. Carlton Savannah seems to have been eclipsed by Hyatt and it is not the only one.

Some of the key questions would be how was the project appraised? Was sufficient security taken for this loan? What accounts for the tremendous decline in the value of this asset?