This is the time to reflect on the changes we have witnessed in the last year and the several challenges arising from those. This column will attempt to combine the ‘Property Matters’ concerns with the ongoing examination of the CL Financial fiasco.

For me, the largest single event this year was the completion of the work of the Uff Commission of Enquiry into the Public Sector Construction Industry, with particular reference to UDeCOTT and the HDC.  The controversial Commission of Enquiry was at the centre of widespread public concerns as to the level of corruption in the State construction sector.  To his credit, the Enquiry Chairman, Professor John Uff QC, PhD, insisted that the proceedings be televised and the results of each day’s hearings were also posted to its website.

The Uff Report made history in this country, since it is the first time that a government has published the Report of a Commission of Enquiry.  That is no small accomplishment and despite the fact that these massive wrongdoings took place under the last PNM administration, the act of publication has to be welcomed.

But there are still challenges, because, for whatever reason, the Uff Commission’s website, www.constructionenquiry.gov.tt has now been shut down, which is a real pity, since it contains the important testimony of many witnesses on the issues in this area.  That website needs to be re-opened and I am calling on the Attorney General, under whose Ministry the Enquiry was operated, to ensure that takes place.  It is no large expense to have these important documents made available to the public.  In light of their educative content, I would suggest that the actual documents be housed at UWI, as they have a direct bearing on the deliberations of the Engineering and Social Sciences Faculties.

Of course we had the sight of a fleeing Calder Hart and a defeated Patrick Manning, his PNM cohorts drinking  bitter tea for his fever, all attributable in my view to the groundbreaking Uff Commission.

Looking forward, we have the fact that the 91 recommendations of the Uff Report were adopted by the Peoples Partnership in the run-up to the 24th May General Election.  We have now been promised that those are to be implemented by Minister of Justice, Herbert Volney.  We await Volney’s early report as to the implementation.

In that connection and taking from the PNM example, I am, once again, calling for the publication of the report of the Commission of Enquiry into the Piarco Airport project.  The Bernard Report must be published now. 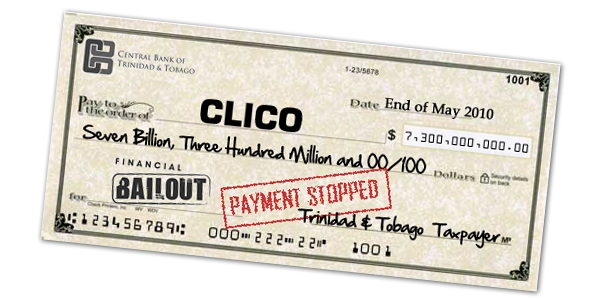 The other huge event of the year was the budget speech on 8th September 2010, in which Finance Minister, Winston Dookeran, disclosed publicly that he was revising the terms of the CL Financial bailout.  That bailout was a hugely suspect act, the largest financial commitment ever undertaken in this country, without proper due diligence or even any proper ventilation in the Parliament.  Our Republic had never been so financially violated and in broad daylight.  It was encouraging to see the Finance Minister take the point to its logical conclusion and of course that brought about the large-scale organisation of various aggrieved groups to put their point.

That series of organisations, committed to the doubtful mantra of the guaranteed investment – whatever that is – took on a series of bizarre and increasingly combative stances.  The signature theme being that ‘We are not responsible for our decision’.  We were being treated to a spectacle worthy of any of the ‘Ole Mas’ presentations of yore, in which successful investors – on average at least $700,000 was invested by each of these ‘protestors’ – having benefited from the operation of the capitalist system were seeking 100% redemption from the State.

The entry of the Prime Minister into this debate on 1st October was in my view a turning-point in our development.  For the first time in my memory a politician, who had the majority, to achieve the significant changes which had been tabled, stepped back from that act of sheer power to attempt an act of persuasion.  It was a signal lesson in the reality of possibility in our lifetime.  Even if one is amongst the Clico Policyholders’ Group (CPG) and feeling aggrieved, the calm audacity of the Prime Minister’s decision must be respected.

Most importantly, we now have a one-man Commission of Enquiry established with the eminent UK jurist, Sir John Colman QC sworn in.  That Commission is to examine the causes of the CL Financial and Hindu Credit Union collapses.  The Colman Commission is expected to start sittings in January 2011 and the Attorney General has directed that its report be delivered in 6 months’ time.

The most comical event of the year is the bold-faced attempt by the former Prime Minister, Patrick Manning, to shift attention away from the PP’s revelations as to the illegal spying activities of various State agencies.  Manning, the original PM, attempted to show-up the Prime Minister, Kamla Persad-Bissessar, with a series of allegations on the status of a house being built with private funds on private lands for a private purpose.  The Prime Minister effectively dismissed Manning’s concocted concerns with the telling observation that all the refutations she quoted were available from the public record, if the accuser had ever been interested in examining that open source.

Having stirred to life and found his voice, it is important to note the several matters on which Manning maintains a stony silence –

For Manning to fail to come clean on these questions, he would run the risk of damaging his hard-won reputation for upstanding values and leadership.

The obvious connection between these various events is the fact that White Collar Crime – which is sometimes, mistakenly, called victim-less crime – is  afflicting our country in a big way.

The year ahead holds significant challenges as we try to go forward in this morass, to escape the conspiracy which I have titled The Code of Silence.

The only way political rulers can carry on as they do, wasting the country’s money for the benefit of their friends and family, is because they are sure of each other’s silence.  The people in the private sector who were responsible for the financial collapse are no different.  The financial collapse is not, as some have falsely claimed, in any way connected with the Wall Street crisis.  That is only a handy coincidence.  If our regulators and politicians were doing their jobs we would not be in this position.

Please remember that the alarm bells on CL Financial were sounded by Trevor Sudama, since the 1999 budget debate.  More to the point, many of the people who still inhabit the Parliament were there at the time.  Again, I give this administration credit for appointing a Commission of Enquiry into this sordid affair.

Also, please remember that both UDeCOTT and the HDC failed to file accounts for years, in breach of the law and State guidelines.  That failure was not remarked upon by members of the then Opposition.  More to the point, we have now had a change in administration, with no word on the UDeCOTT accounts.  I do acknowledge that certain HDC accounts have now been published and that is to be the subject of upcoming commentary.

The Code of Silence must be broken if we are to progress.