On 4th July 2019, the High Court (with presiding judge, Justice Frank Seepersad) ruled in my second lawsuit to get the remaining details of the CL Financial bailout. In the first lawsuit, I was able to get the details of the $10.823 Billion in Public Money paid to 13,200 named EFPA claimants within this massive bailout. CLICO sold the EFPA, which comprised most of its liabilities at the time of the CL Financial collapse in January 2009.

The ruling specified that my full costs be paid by the State, so that showed the case ended overwhelmingly in my favour. That said, there was a significant disappointment in that the ruling also specified that the payees’ names for British American Insurance Company (BAICO) and CLICO be omitted from the details to be provided within 28 days.

To my surprise a number of well-meaning people, some supporters even, expressed support for that reservation in Justice Frank Seepersad’s ruling.

Is there any real justification to withhold the names of those who were paid in this $26 Billion bailout?

The irrefutable point is that the same Ministry voluntarily published the full details – names, amounts, policy numbers, dates of payments – of the EFPA payees on 23rd March 2018. That took place after the 24th January 2018 Consent Order which ended the case in the Appeal Court. My attorneys wrote to the Chief State Solicitor (CSS) – a department of the Ministry of the Attorney General and Legal Affairs – to chase compliance during that period. The CSS repeatedly wrote to confirm that this or that was being checked and collated and so on.

The data was provided in CD format under cover of a letter from the Chief State Solicitor. Even if one accepts the State’s claims that its Senior Counsel, Russell Martineau, did not approve that release, that does not change the fact that the release must have been approved by the Permanent Secretary, whose instructions were being executed by the Chief State Solicitor. You see?

Apart from the actual disclosure, there were intense written exchanges with PS Vishnu Dhanpaul between 25th April 2018 and 31st October 2018 in which I repeatedly pointed-out that, having disclosed the EFPA details, the Ministry could not credibly refuse to give the details of other payments. At no point in that six-month series of exchanges did Dhanpaul attempt to deny that the EFPA disclosures had been made or that any error occurred. 19th November 2018 was the first time that there was an attempt to portray that disclosure as being ‘inadvertent‘.

I have written extensively in these pages on the details of those EFPA disclosures and I am yet to receive a legal letter or anything like that.

Apart from its attempts to avoid any responsibility for the EFPA disclosure, the Ministry used the argument that the disclosure of names and amounts received would place those persons at risk. In the event, Justice Seepersad accepted those arguments in making his ruling (see para 125 extract in addendum below) but my critique goes beyond the generic argument about the fear of crime to examine the actual facts.

Of course, as happened with the EFPA details, the Ministry can always publish the full details in its custody and/or control which would be supportive of improved standards of proper accountability and transparency in the expenditure of Public Money. My goal remains to have all the details of all those payments published, nothing less.

ADDENDUM: Extracts from the Ruling 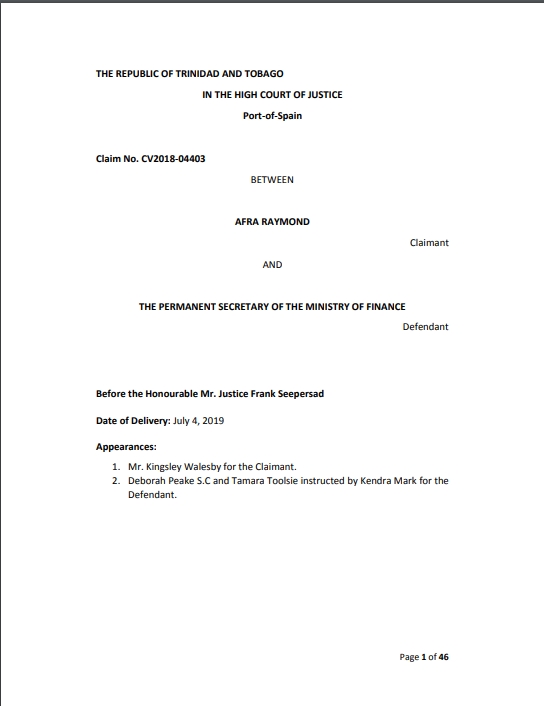 4 thoughts on “CL Financial bailout – After the Judgment”