The recent series of comments on this Property Tax have prompted my return to this controversial issue. Some of those comments were;

Property owners have had an unprecedented tax holiday, with no property tax paid since 2009. At a minimum, using the lower 2009 revenues, $1.287 Billion more remained with our property-owners.

I will touch on three of the most common objections –

Finally, Seereeram claimed that the Property Tax would discourage investment amongst those property owners who were considering improvements, expansions or new construction. That is completely untrue as Property Tax can act as a trigger for development. Just consider that one of the discordant sights in our country is to see dilapidated, vandalised or abandoned properties along main roads. Or we can often see underutilised property in a bustling area which is being modernised. Why is that? The reasons are many, ranging from family disputes to entire families having migrated and so on. But the fact is that our tiny property taxes do not incentivise the resolution of those disputes or the redevelopment of those properties. Now contrast that with what we see when visiting the developed countries, in which I can scarcely remember ever seeing any such scenario. The tax rates in those districts are set at such a level and the enforcement so businesslike, that any disputed or abandoned property would soon be sold for unpaid taxes. In the case of underutilised property in those jurisdictions, it is very expensive to pay the property taxes, so the decision.

These are the national totals of Property Tax paid between 1993-2009, collected as – 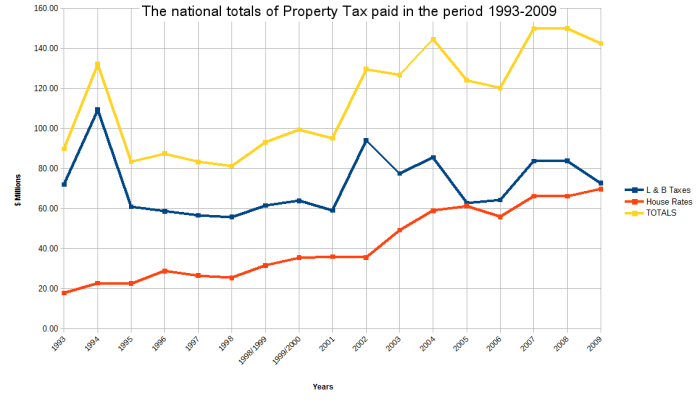 The objections from the Opposition elements are bemusing, to say the least, given the pattern of tax collections set out in the graph and table. Plainly, when the UNC was in power in the period 1995-2001, there was a dramatic and unexplained decline in the collections of Land & Building Taxes. That decline was reversed when the UNC left office