My focus has been on grand corruption, the large-scale acts of fraud which endanger the very stability and rationale of our society and its key institutions. No act of grand corruption is possible in isolation. The only way to steal these large amount of money is to have the collaboration of responsible officials and professionals, who either look the other way or actively assist in the looting.

That was the case in Eden Gardens and the other episodes covered thus far. None of these acts of grand corruption would have been possible without the intentional help of professionals such as attorneys, engineers, accountants or even surveyors. Our current private and public sector systems rely on the professional standards and ethics of those professionals to ensure value for money. 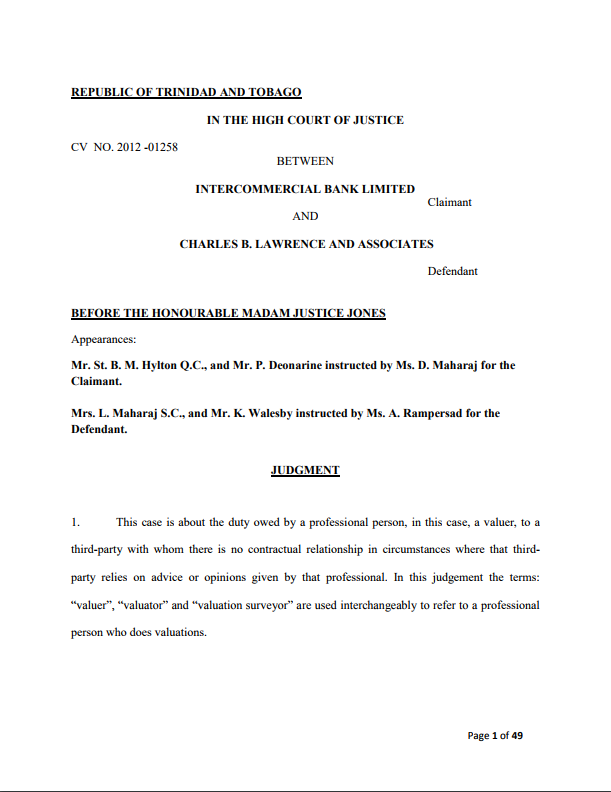 The previous article in this series examined the main points arising from ICATT’s attempts to use its disciplinary procedures against one of its members, Chanka Seeterram, who had been auditor for the failed Hindu Credit Union. This column continues the series by examining the 16 October 2014 High Court ruling arising from a December 2008 mortgage valuation by Charles B Lawrence and Associates of a property on the San Fernando bypass.

That property is on the northern side of the San Fernando Bypass, between Rushworth Street and Navet Road and it was valued for $15M. The lender was Intercommercial Bank Ltd (IBL) and a loan of $3M was made using that property as security. When the loan was not serviced, IBL attempted to sell the property by appointment of receivers who invited offers in March-April 2010. The highest offer received was for $2.0M. In July 2010, Brent Augustus provided a valuation for the Receiver at $1.9M.

IBL then bought two lawsuits in the sum of $4,761,636.70 – one against its attorneys, for negligence in doing the title search; the other against the valuers, for negligence in preparing the property valuation. The attorneys settled the matter by Consent Order by paying $2.4M, but admitting no liability. The High Court ruling was in IBL’s favour, with the valuers ordered to pay $2,361,636.70 plus interest and costs. The valuers have appealed that ruling.

The interesting points arising in that case were –

I will certainly be paying attention to this appeal as it proceeds.