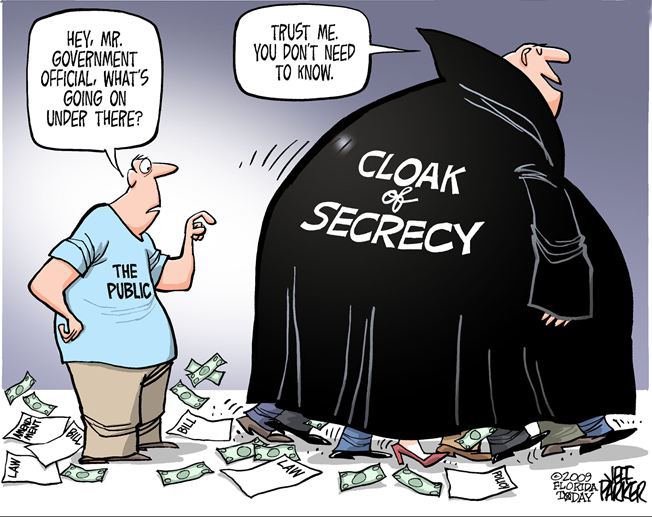 In Privacy Pros and Cons, I considered the Parliamentary debate around the recent SSA Amendment Bill. Most of that debate seemed to be concerned with the limits on the rights of citizens to privacy, but my concern was that there was precious little comfort being offered in terms of the secret conduct of our public affairs.

If we are to evolve to developed nation status it is essential that the State seriously reform its culture of obscurity and secrecy, that is the contention I am advancing here.

The Freedom of Information Act (FoIA) is one of the main tools used by citizens to obtain information held by public authorities and it contains very strong provisions to preserve the public interest. According to S.35 of the FoIA, public authorities must do a ‘public interest test’ for all requests, even when the information is determined to be in an ‘exempt’ category as defined in sections 24 to 34. There are aspects of the FoIA which could be significantly improved, so one hopes that the AG will be seeking comments before the proposed revisions to that Act are finalised.

In addition to the formal arrangements existing under the FoIA, there is the informal practice of ‘whistleblowing’ – in local parlance ‘bussing a mark‘. According to the Association of Certified Fraud Examiners 2014 Global Fraud Study, whistleblowing is the best method of detecting fraud –

…Tips are consistently and by far the most common detection method. Over 40% of all cases were detected by a tip — more than twice the rate of any other detection method. Employees accounted for nearly half of all tips that led to the discovery of fraud… (pg 4)

The recently-tabled Whistleblower Protection Bill is an important step towards providing legal protection for those who report wrongdoing in both public and private organisations. The Joint Select Committee on this Bill completed its work on 22nd January 2016 and it now needs to be tabled for debate.

Although the FoIA and Whistleblowing are valuable tools to obtain official information, the most important one is yet to be properly explored. I am referring to modern arrangements for the routine publication of official information in a searchable form. That system is referred to as ‘Open Data’ and it is widely used in the developed countries to allow access to information without the need to make requests or wait on whistleblowers.

Recently there were a series of revelations in relation to the expenses claimed by Members of Parliament and that ended the Ministerial career of Marlene McDonald, who had held the Housing and Urban Development portfolio. It is still unclear whether Ms McDonald resigned or was in fact dismissed, but more importantly, there are other MPs who had employed relatives who have remained in office. The initial request by Fixing T&T led to the McDonald revelations and their further request for the employment records of all MPs from 2010 to present was satisfied, with that information available here.

That was a major breakthrough, but the move to open data was still not happening, so I made an application on 25th March 2016 to the Parliament together with my colleagues at the T&T Transparency Institute, Disclosure Today and the Constitution Reform Forum. We applied for all the information on all the expenses of all the MPs from 2005 to 2015 with quarterly updates as required. Given that the earlier applications had been satisfied, one cannot see that there are any reasonable grounds to refuse our request for OPEN DATA on MPs expenses, so dialogue is continuing.

The December 2015 dismissal of the Central Bank Governor, Jwala Rambaran, for his alleged breach of banking confidentiality laws in disclosing the recipients of foreign exchange was yet another big issue with strong positions being taken as to the party political and legal implications. I was struck by the lack of any solid discussion as to the meaning of the figures disclosed by the former Governor, given the real importance of that information in our current recession. It seems to me that the public interest would be well served by an arrangement which disclosed that type of information regularly so that we could be better informed as to our policy choices, but that is a detailed discussion for another article.

The issues on public information go way beyond the questions raised above since there are serious cases in which large-scale wrongdoing was alleged and formally investigated, yet those reports are deliberately suppressed. It is impossible to improve processes unless one can determine where the errors occurred and the ringleaders removed from their positions of responsibility.

In addition to the examples given above, where there is an urgent need for full and frank disclosure, the full details of that S.34 fiasco must now be released so that the public can truly understand what happened. I, for one, would like to know the exact time on Friday 31st August 2012 at which this section of the law was taken to our then President, Professor Max Richards, for his signature. That was the 50th anniversary of our country’s Independence. At what time did President Richards sign S.34?

This is a short list of the various issues which tell me that we do live in a Private State, in which there is an effective consensus at the political level to preserve the status quo. That Private State needs to reform and we need to maintain our vigilance.