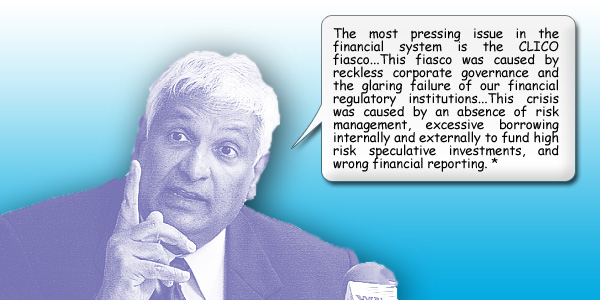 The examination of CLICO Investment Bank (CIB) continues, based on the affidavits in the Central Bank’s winding-up action.

Firstly, as an overview, I consider the various versions of the accounts and their implications –

That is an overview of the CIB position, which leaves the burning question – ‘Where did all this money go?‘  For $5.9Bn in assets to vanish in 13 months is an incredible failure of corporate governance and state oversight.  Given paras 5 and 6 of Hiralal’s affidavits – which effectively seek to claim that the events of the 15 January 2009 were unexpected – it seems that neither the auditors nor the regulators performed properly in this case.  But more on that later…

Here are some details of where the money went and how it was handled.  This is taken from para 7 of the affidavit of Ernst & Young Director, Maria Daniel –

I said ‘some details’ and the full affidavit can be viewed at https://afraraymond.files.wordpress.com/2010/09/cibey1.pdf. 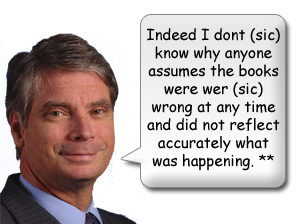 William Lucie-Smith, the erstwhile Managing Partner of PwC until his retirement in June 2004, commenting on the CL Financial bailout, recently stated “…Indeed I dont (sic) know why anyone assumes the books were wer (sic) wrong at any time and did not reflect accurately what was happening…”

Mr. Lucie-Smith, the people questioning the accuracy of those CL Financial books now includes Ernst & Young and our Finance Minister, not just this Chartered Surveyor.  Given the quantity and quality of the information presented here, I am wondering if you are going to stick with that opinion.  Will Lucie-Smith resile from those views?  That kind of reversal would require real character and integrity.
** See http://www.trinidadexpress.com/commentaries/CL_Financial_A_new_strategy_required_.html.

Where does the Truth Lie?

If PwC’s audits were properly done, based on true accounts received from CIB and the relevant accounting standards, then the Inspector of Financial Institutions has been at fault to allow this failed institution to retain its licence.  If, as an alternative, the Inspector relied on misleading accounts, then one could hardly lay the full blame onto them.  In the latter case, either CIB’s in-house accountants, or the auditing firm PwC bears a heavy responsibility for this entire crisis.

One can be escapist and say ‘on the one hand this, but on the other hand that‘ for only so long before reality sets in.  The fact is the group collapsed because it ran out of money.  Exactly how it ran out of money is a huge story of our age, supposedly an enlightened and more educated one.  That is the $57,000 question.

But the allocation of responsibility would also have to go beyond the role of the auditors to include the failure of the Inspector to detect the fact that CIB had filed no Corporation Tax returns for 2007.  Or was it that the Inspector’s office did note that and simply took no action?

What is the role of ICATT in all this confusion?  I tried with an open letter on 19th October 2009 and several dialogues with various of their Board of Directors.  Is ICATT investigating any aspect of this fiasco?  Does ICATT have any concerns over the MoU/Shareholders’ Agreement and its terms?  Does ICATT exist solely to advance and protect the professional interests of its membership?  Is it unreasonable for the general public to expect ICATT to have spoken out on these burning issues?  With all respect to the people concerned, ICATT’s silence is resembling a cover-up.

What is the meaning of ‘Fit and Proper’?

Our laws sets the penalty for murder as hanging, so, even if one does not agree, it is clear that the penalty is final to both indicate society’s intolerance of taking another human life and to prevent a recurrence.

The ‘Fit and Proper’ regulations are meant to regulate the behaviour of the Directors and Officers of Financial Institutions, since they are the people to whom we entrust our monies.  Any recklessness or dishonesty on their part can lead to severe loss of capital and ‘Fit and Proper’ ensures that those acts are punishable by loss of your privilege to serve in those high-powered positions.  The Companies Act even makes it illegal for Company Directors to ‘mismanage’ the affairs of a company.

Look at the case of the failed insurer, Goodwill Insurance, the Central Bank took a winding-up action which ended in two of its Directors – Johann Lambkin and Lennard Woodley – being fined $20M and banned from serving as Directors or Managers in any company incorporated in here for 5 years – see http://webopac.ttlawcourts.org/LibraryJud/Judgments/HC/rajkumar/2009/CV_06_02529DD30July2009.pdf.

Why is the Central Bank not proceeding against the CL Financial Directors?

So far I have been writing about this CL Financial collapse as if it took place in January 2009 and that is a position in need of a re-think.

When did the CLF group actually collapse?