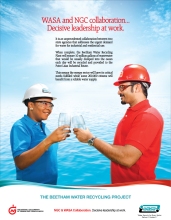 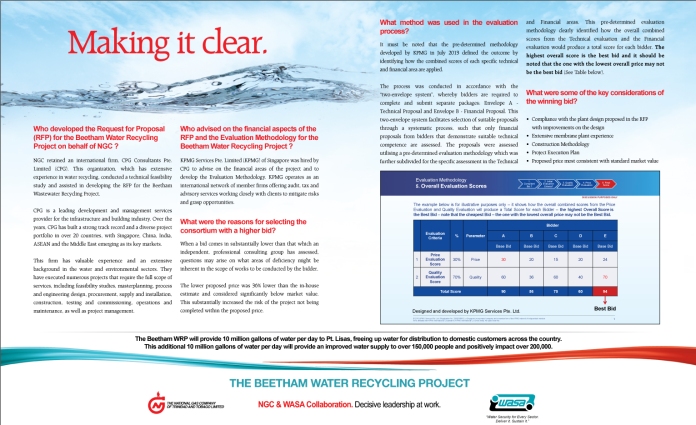 The title for this column is borrowed from the ongoing, expensive advertising campaign being mounted by WASA & NGC to promote the attributes of the Beetham Water Recycling Project. (Click thumbnails at right to magnify)

The Project is in two stages – to Design and Build a water recycling plant at Beetham and to Operate & Maintain that plant for a period of five years.  The recycled water is to be piped to Point Lisas for the cooling requirements of industrial customers, which we are told will ‘free-up’ about 10 million gallons per day of drinking water.  This Design & Build contract for $1.043 Billion was awarded to SIS Ltd and its sub-contractors on 10 March 2014.

Despite the attributes presented by this project, there are grounds for serious concern as to the process adopted and the actions of the various public officials involved.

The Leader of the Opposition, Dr. Keith Rowley, first raised this matter in the budget debate of September 2013, following that with a formal complaint, on 10 March 2014, to President Carmona.  In addition, Dr. Rowley’s Private Motion was to be debated in Parliament on Friday 28 March calling for the Prime Minister to stop the project and investigate the matter.

Having considered the available facts, the JCC issued a Press Release on 20 March 2014 calling for the project to be immediately halted. The JCC is also calling for an independent public investigation into this entire matter.

The JCC’s preliminary concerns are –

The lawful circumvention of our country’s oversight provisions in this matter is glaring.  This situation amounts to a deliberate choice by public officials to take the path to obscurity, with diminished transparency in the execution of this huge project.

As I wrote in June 2008, criticising the previous administration’s mega-projects via UDECOTT – “Either the Cabinet or its advisers are responsible. We are either dealing with a lack of rectitude at the highest level of our republic or a sobering naïveté.”

Sad to say, that much is ‘Crystal Clear‘.