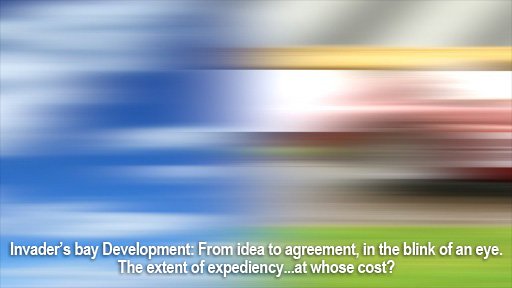 The way the Ministry of Planning & the Economy (MPE) is persisting in their course of action on the Invader’s Bay development is perturbing in terms of the long term consequences of short-term decision-making.

At Section 2.0 of the Request for Proposals (RFP) for Invader’s Bay we read

…For Trinidad and Tobago this is a “major waterfront transformation” along the line of other signature waterfront developments such as Darling Habour (sic) in Sydney, Baltimore Inner Habour (sic), the Habour-front (sic) in Toronto, London Docklands and Teleport City in Tokyo. Although the genesis of the projects may vary, the result has generally been bold and dramatic. With the change in the manner in which ports operate and cargo is transported, waterfront property is now more valuable for its residential, retail and recreational function than simply for port activity with heavy industry, docks and fenced off warehouses, as is the case currently in Port of Spain…

We are being asked to consider the Invader’s Bay initiative ‘along the line’ of other leading international examples, which in itself is a good place to proceed from.  The reality is that those developments cited by the MPE all took decades to conceive and what is more, the authors of the RFP know that.  Yet we are also being asked to believe that a workable concept/s could be devised for Invader’s Bay in an RFP which is silent on the current strategic plans for the capital and only gives proposers 6 weeks to prepare.

Of course the lack of consultation will severely limit the participation of many important developers, not to mention the public.

The point is that in all those cities cited by the RFP, there is a serious commitment to consultation, which means that those large-scale transformations took considerable time to conceptualise.

In the city of New York, for example, there has been a long-standing commitment to community-based development.  Check this 6 October webcast from The New School – the introduction is instructive –

For decades, deliberations over land use in New York City have included developers, community boards, elected officials, the Department of City Planning and other city agencies. Do the people who live and work in city neighborhoods have a sufficient voice? Do residents improve the process, or impede progress? Who is best positioned to determine a neighborhood’s needs, and what are the best structures for public participation? New York has long been a leader in community-based development but as the city recovers from the Great Recession, what does the future hold?

And that is just one reference, readers can ‘Google’ to find the many other supportive examples.  In the very RFP, as well as in the recent budget, there is a clear commitment to consultation in national development.  Except in this case.

But there is more.

As I wrote in the opening of ‘Reflections on Republic Day’, on the Raymond & Pierre website on 27 September 2007 –

The best example I can think of for the kind of broad commitment to consultation is, of course, the site of the World Trade Centre in Lower Manhattan: Ground Zero. This is a very interesting example since the site is privately owned and the City of New York is controlled by the Democrats while the Republicans control the national government of the USA. Against this background of different players we have the fact that the destruction of the WTC was a most severe blow to US prestige and power. The entire defense apparatus was rendered useless by that attack. Arguably, there could be no site in the world with a more urgent claim to large-scale redevelopment.

Yet, the fact is that a sort of compact has been arrived at between the parties to the effect that no redevelopment will take place unless and until everyone has had their say. For example, there was a recently concluded international competition for the design of the 911 Memorial. There were over 5,000 entries from more than 60 countries and a winner was just selected.

As expected, the consultations have been controversial and emotional but the fact is that an environment existed in which such an understanding could work. Whatever one’s view of the American imperium, there is a potency to the existence of that huge crater at the heart of their main city while the necessary conversations go on. Time for us to think again.

At that time I was protesting the haste and waste of the then PNM regime, a consequence of their pattern of proceeding with huge developments without any consultation.

The proposed Developer will be chosen via this RFP process and shall then enter into a Memorandum of Understanding (MOU) with the Government of Trinidad and Tobago (Ministry of Planning and the Economy) for an agreed lease rate. It is expected that this activity would be finalized within one (1) month of the submission of the said RFP.

Which means that we can expect the choice of the proposed Developer will be made and the lease agreements completed in one month from the closing date. Yes, Friday 4 November.

Sad to say, there is even more.  The RFP also specifies –

“…If financing has to be sourced from an external source, the Developer MUST submit a letter of guarantee from the financier as well as a profile of the financier. Failure to comply with this requirement will result in disqualification…”

When we raised the point that this is an impossible condition for new bidders to satisfy, given the sheer scale of the proposed development, both Ministers – Tewarie and Cadiz – attempted to indicate that this mandatory condition was flexible. Unbelievable, but true.

As leaders, whether in government or non-governmental organisations, we have an obligation to learn from the past. This is an effort to document the events in this episode, so that there will be a record, when the Invader’s Bay matter comes to be critically examined in the future.

The clear inconsistency of the position taken in the budget on urban planning was highlighted in last week’s column. With respect to this project, we noted the attempt to cast this development in the same light as other examples which all involved long-term consultation, the silence on the existing plans, the impossibly-short timetable to elicit fresh proposals, the even-shorter timetable for selection and agreement of lease terms, the wobbling on the financial requirements and incredibly, that the scoring criteria were to be finalized after the proposals were submitted.

It is literally impossible to determine which of these is worse than the others and it is beyond the imagination of any fiction writer I know to take a plot this far. But this is what is happening in our country today.

In my mind, all of these, taken together, show that the publication of the RFP is a form of sham dialogue and openness. If this is the genuine attempt by the MPE, to properly seek the public interest, then I am giving them an ‘F’ for effort.

What we are seeing here is a recipe for disaster, we already have all the ingredients of corruption, so what is next?

It really does make me wonder who runs this country and when, if ever, can we achieve consistent and equitable government. Who is the real power?

6 thoughts on “Property Matters – Only a matter of time”