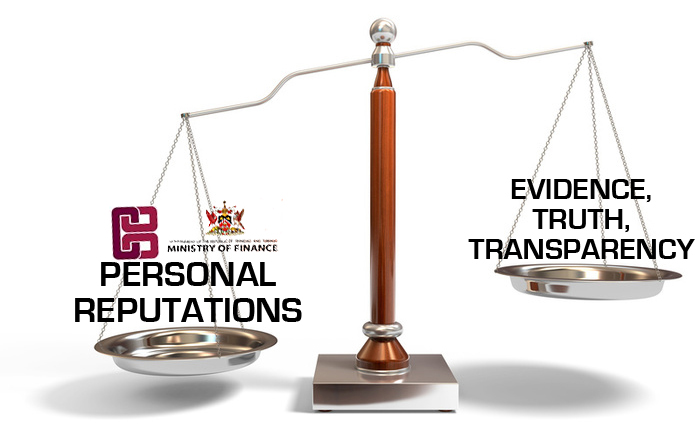 The Colman Commission into the failure of CLF Financial and the Hindu Credit Union is just about to move into its second round of Hearings and the public can expect to have further testimony on the losses suffered by people who deposited monies with CL Financial.

I have made several submissions to the Commission and have been invited to give evidence.  I am reliably informed that there have been strong and unanimous objections to my participation in the Colman Commission.  It would seem that only the Commission itself is interested in having my testimony go onto the record.

It is not surprising to me that objections of that sort would be arising now, but readers need to have a context.

The Colman Commission was established to find out how this fiasco occurred, recommend methods to stop a recurrence and also to identify responsible people who are apt for lawsuits or criminal charges.  The main parties can be expected to give self-serving evidence, designed to exonerate themselves from any blame.  We can also expect to hear more attempts to put the blame onto Wall Street, despite the claims in the CL Financial 2007 Annual Report– this is from the preamble –

…“The Next Wave of Growth” is the theme of this annual report, highlighting, to quote our Chairman, “that out of any crisis opportunities will emerge and our progress during the year under review prepares us to seize those opportunities and unlock value.” We have confidence in our ability to not only navigate this financial storm but to find fresh and profitable opportunities within it…

That Annual Report was published on 23 January 2009 – yes, that is 10 days after Duprey wrote to the Central Bank Governor for urgent financial assistance and one week before the bailout was signed on 30 January.

The Colman Commission is a Public Inquiry into a matter of major importance; it was approved by the Cabinet and installed by the President of the Republic.  A Commission of Enquiry can only make findings on the evidence submitted to it, so it would be very important for some people to have certain evidence omitted.

One of the most outrageous aspects of the entire Uff Enquiry was the use of public money by UDECOTT to attempt to block certain documents coming into evidence.  Those various attempts to limit the scope of the Uff Enquiry were disgusting to all right-thinking people and seemed to be a straight case of the ‘tail wagging the dog‘.

It is unacceptable that the Ministry of Finance could be taking a position which is seeking to exclude my evidence from the Commission.  If that were so, it would mean that Ministry is acting in a manner which effectively dilutes the Commission and what is more, appears to be incompatible with the intention of the Cabinet to have a full public enquiry into this matter of national concern.  In addition, the Central Bank is also reported to have objected.

The Colman Commission needs to be robust in getting at the truth of this financial disaster.

At the time of writing I have no details of the new bailout plan, proposed to be laid in Parliament for debate on Wednesday 14 September.  According to a report in the Trinidad and Tobago Guardian, the proposed plan is in two limbs, the first includes the issuance of new bonds to raise monies for the payment of policyholders, while the second is the creation of a prohibition against lawsuits against the Central Bank.

The three concerns I have at this stage are –

It is at moments like this that a responsible and long-term approach to these huge issues is in the interest of the entire nation.

In this article, which was published on September 13th 2011, I stated that there were unanimous objections to my appearance as a witness at the Colman Commission. I wrote that on the basis of certain reports given to me by persons who were present at those meetings, but after receiving a challenge from the attorneys for the Trinidad & Tobago Securities & Exchange Commission (TTSEC), it was impossible to corroborate that aspect of the article – i.e. that the TTSEC had objected to my appearance.

This notice is to correct the record in that respect, I do regret any inconvenience or damage caused to the TTSEC by my publication of those allegations. – a Correction with similar effect was published in the Business Guardian of 18th November and I do regret the delay in publishing this one here for blog-readers.

One thought on “The Colman Commission – Balancing the Scale”