Continuing the series of examinations into the purpose and performance of our State Enterprises, this week I am looking at an important issue which seems to be emerging at the Education Facilities Company Ltd. (EFCL).

EFCL is a state-owned company involved in the building and maintenance of schools.  It consumes public money in the execution of its functions and that is why it is important to put these points now.

One of the biggest public concerns is the high level of white-collar crime, which means bribery, corruption, fraud, over-billing, ‘back-fitting’, tax-evasion, asset-stripping and so on.  White Collar crime is a growth industry, since the rewards are very high, while the risk of being caught or punished is extremely remote.

Due to the size of the State, a great deal of that white collar crime can be found in State Institutions.  Once Public Money is being spent, we must demand a high standard of accountability and transparency.

In terms of principles, there needs to be an appropriate balance between the long-established ‘Right of privacy‘ in commercial transactions and the growing ‘Right to know‘ which is part of the emerging social order.  There will be different views as to where the correct balance exists and furthermore, the consensus position will shift as time passes.

It seems to me that the default position should be that, in doubtful cases, the right of the public to information should prevail, since we are the ones paying the costs.  Indeed, that position forms part of the Freedom of Information Act, so that is substantial support.

In early 2009 we witnessed an attempt by the then PNM government to amend the Integrity in Public Life Act (IPLA) so that people reporting breaches of that Act would have been forced to give their names and addresses.  That arrangement would have given even greater protection to corrupt officials, since virtually no-one would want to make a report.  Of course people are strongly encouraged to report ‘normal’ crime like rape, robbery, murder and so on – further encouragement is offered by allowing them to make anonymous reports via 800-TIPS, for example.  Those proposals to amend the IPLA would have encouraged corrupt behaviour by reducing the reports.

That Bill was piloted by then Attorney-General, Bridget Annissette-George.  The proposals were strongly opposed in the Parliament and in the wider society, eventually being withdrawn.  One of the strongest protestors in the Parliamentary debate was Dr. Tim Gopeesingh, who was reported to have accused the government of trying to intimidate people into not making reports. [Hansard, 1 May 2009 p.441] On that occasion, the Standing Orders were used by Colm Imbert, to curtail Gopeesingh’s presentation. [Hansard, 1 May 2009 p.455]

The normal good governance provisions for annual accounts, Board Meetings, minutes and so on are very important.  But those provisions must be supplemented by an atmosphere and a series of institutional arrangements which facilitate Whistle-Blowers.  There must be clear channels and protection for Whistle-Blowers if we are to have any chance of reducing corruption in our country.

Without the assistance of Whistle-Blowers, we would not have known of the Piarco Airport or UDeCoTT fiascos and we know for sure that somebody leaked the file on the Heights of Guanapo Church just prior to last year’s election.  We need encouragement for Whistle-Blowers – in some countries they are even given big cash rewards.  The JCC has been active with its partners – TTMA, the Chamber of Commerce and the Transparency Institute – in making Public Procurement proposals to the Joint Select Committee.  An important element of those proposals is the creation of proper channels for Whistle-Blowers.

I recently received a copy of some EFCL documents, which were stated to be their new Confidentiality Policy Statement and a Staff Confidentiality Agreement for the signature of employees.  I was also told, separately, that EFCL staff are being required to sign that Agreement, under threat of dismissal.  What is more, the Agreement contains a specific clause which forbids revelation of either the existence or the terms of the agreement.

If those documents are genuine, there are serious grounds for concern, so I made a written query via email on Friday 1st July to the EFCL’s CEO, Paul Taylor, and its Chairman, Ronald Phillip.  I outlined what had been reported to me and asked these questions –

I am reliably informed that EFCL staff were recently directed to sign a ‘Confidentiality Agreement’, the rationale being that it is the new Company policy.

Before taking this any further, I am requesting your written response to these questions –

Assuming a new Confidentiality Policy is in place, these are my queries –

I would appreciate a timely response.

That email was also copied, purely for information, to the Minister of Education.  At the time of writing, there has been no acknowledgment or reply.

This is a serious development for these reasons –

It is clear to me that this kind of stealthy restriction on the possibility of staff becoming whistle-blowers is incompatible with the high-profile public statements of support for a new, effective public procurement system. Those statements range from the promises at page 18 of the People’s Partnership Manifesto to numerous speeches by the present Prime Minister.

The reality is inescapable –

I am closing by wondering, aloud, if this is the shape of the new Information policy for our State Enterprises.

SIDEBAR: What is a Super Injunction?

It is possible for a prominent person to obtain a Court Order called an injunction to prevent the publication of material which is likely to be damaging to their reputation.  That is a long-standing legal right and there has been a recent series of decisions in the UK in which super-sensitive, high profile people have been able to obtain ‘Super-injunctions’ from the High Court, which have the effect of prohibiting the publication and further prohibiting revealing the very existence of the injunction itself.  Of course the media have been fighting that in Court and there are two investigations underway into whether the ‘Super-Injunction’ is itself an abusive instrument.  The emerging thinking seems to be that these ‘Super-Injunctions’ are destroying the information balance I outlined earlier. 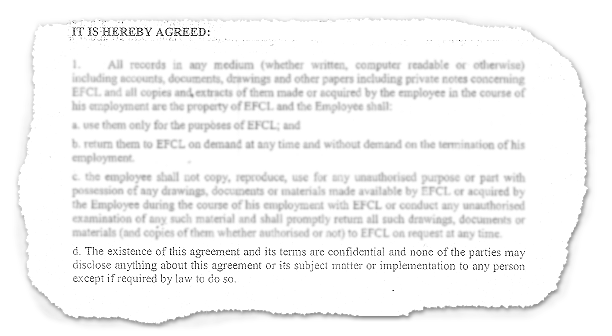 This EFCL Confidentiality Policy, if it is so, would seem to be a similar device, doing great violence to the information balance.