Amidst the raging debate on the rights of the disappointed depositors versus those of the anxious taxpayer, I am continuing to examine some more of the fundamental issues. Yes, I accept that there are depositors amongst the taxpayers, but those interests are not in alignment, hence the discussion.

By making a legislative proposal to frustrate the CLICO Policyholders Group (CPG) litigation, the government seemed to have conceded the merit of the protestors’ case. Those proposals have now been withdrawn and on Friday 1st October, the Prime Minister gave an extensive reply to the CPG. The strategic decision seems to have been to retreat from the narrow corridors of legality and strive for the broad perspectives of the entire nation. The apparent decision is to favour an act of persuasion over one of sheer power. Given our norms of governance in these parts, that is no small shift and it is a welcome sign, quite apart from my agreeing with the stance taken.

Most importantly, the Prime Minister announced a Commission of Enquiry into the collapse of both CL Financial and Hindu Credit Union (HCU).

Once again, I am going to refrain from discussing the legal issues, despite the tempting developments in this aspect of the matter. I am going to keep deepening this discourse so that we can have a better quality of discussion

What was the EFPA?

Firstly, it is necessary to spend a little time on the true nature of the Executive Flexible Premium Annuity (EFPA), since that product is what the majority of this dispute is about. The product was approved for marketing by the Supervisor of Insurance in 1990.

An annuity is an investment product for an individual, to save for a specified future expense by means of periodic payments. CLICO had an approval for a Flexible Premium Annuities, which was attractive to those people who had fluctuating incomes, but soon led to the sale of Single Premium Annuities. Those are investments in which the investor pays a single premium and receives the benefits after CLICO had held the funds for a short term.

So the single premium can be viewed as a deposit, which is what many of the agents called it. While the annuity, traditionally a long-term investment product, then assumed a norm in which most EFPAs were held for 5 years or less.

In saying so, it is interesting to consider the question of just how an organisation can purchase an annuity, which is an investment product for an individual. The fact that so many organisations did so, does damage to the notion that this EFPA was sold in conformity with its true nature.

So, in summary we have an approved annuity, which is mainly sold as a single-premium, short-term, high-interest investment product to anyone who wants one, including Credit Unions, private companies – several CLICO agents tried, repeatedly, to get deposits from our firm – and State-owned corporations. At some point that annuity morphed, by this series of changes, which seem, to me at least, to have fundamentally altered the character of the approved instrument

All of which returns to the basic accounting principle that when one is trying to interpret a situation such as this, the correct procedure is to be guided by the substance rather than the form of the transaction. That is the background to my assertion that the correct interpretation of the EFPA is as a deposit.

When you consider the very high interest rates offered and the unique way that CLICO altered the EFPA, one has to wonder how the regulator viewed these activities. But more on the regulators later.

What did CLICO become?

Even beyond the changes which the EFPA underwent in the hands of CLICO, the reverse was also to take place. That happened because CLICO changed the EFPA to suit the strategy of its parent company, CL Financial, but the parent group (and ultimately CLICO) in the end were irreversibly changed and then destroyed by the EFPA’s success. Let me explain –

In our system, there are 3 species of financial institution –

CLICO’s liabilities, as stated by the Finance Minister, were $6Bn to traditional insurance policyholders and $12Bn to depositors. The question being, given that two-thirds of their liabilities are non-insurance, how could it be legitimate to consider CLICO an insurance company? More to the point and looking forward, where does a company like CLICO fit into our regulatory framework? That is an important aspect for us to consider for the future of our financial services market.

What were the Regulators doing? 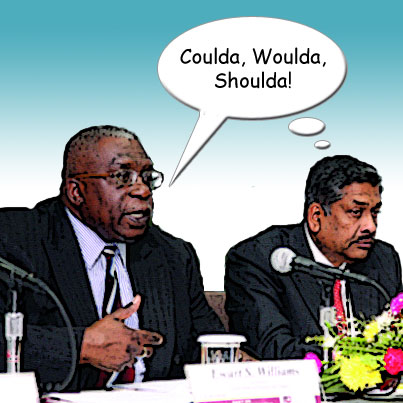 That is the burning question at this time and a large part of the blame for the CL Financial collapse must lay with the regulators.  In this case it seems that the Governor of the Central Bank and Inspector of Financial Institutions both have serious questions to answer.  The situation is really too much to even imagine, but a few examples –

What is to become of these self-confessed, slack regulators?  The state has already saddled a considerable burden in assisting these depositors, but are we to have a continuation of this disastrous performance?

I ask the question because the CLICO pattern is not over, not at all.  There are still other doubtful financial institutions offering incredible rates of interest, with special incentives for the vulnerable.  Yes, it is still going on – see the sidebar.  Do we have the will to do differently?  Can we do better?

As a matter of urgency, we need to have published the full details of those who gained from the $7.3Bn already spent in this scandalous bailout.  We need names, addresses, amounts of capital and interest and date of payments as a minimum.  Those monies are public monies and if it was correct to insist on disclosure in the shocking case of the ‘Secret Scholarship Scandal‘ last year, it is equally right in this disgusting case.

We also need to have published the full details of the $1.0Bn of ‘non-performing’ loans on CIB’s books.

The size of the outstanding claims is a total of about $18Bn, which is colossal when compared to the largest pool of money available to the state – i.e. the Heritage and Stabilisation Fund, which itself holds about $18Bn.  The state cannot bankrupt itself

SIDEBAR: The case of AIC Finance

AIC Finance is owned and run by the Jamaican billionaire, Michael Lee-Chin, who came in for mention in this debate in Anthony Wilson’s 15th October 2009 BG View ‘Will Lee-Chin avoid Duprey’s fate?’ – see http://guardian.co.tt/business/business-guardian/2009/10/15/will-lee-chin-avoid-duprey-s-fate.  I commented on that in Trinidad & Tobago Review of 2nd November 2009 in ‘Duprey’s fate’ – see http://wp.me/pBrZN-43 or http://www.tntreview.com/?p=887 and the point is again pertinent.

AIC Finance defaulted on a USD bond last year – in other words, they were unable to pay their debts – see http://guardian.co.tt/business/business/2009/06/06/lee-chin-late-us47m-bond-payment or http://www.jamaica-gleaner.com/gleaner/20100818/business/business1.html. 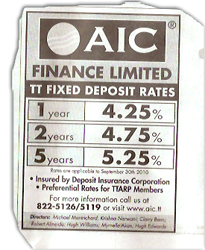 In the last fortnight or so, the same company has been advertising surprisingly high rates of interest in daily newspaper adverts which also offer ‘Preferential rates to Trinidad & Tobago Association of Responsible Persons (TTARP) members’.  Those interest rates range from three to four times the rates being offered by the commercial banks.  If CL Financial could not sustain this strategy, how can AIC continue to offer these rates in today’s market?

That is the question.

The First, is in the positive, democratic interpretation of the revised bailout being offered to the estimated 250,000 people affected as policyholders and depositors.  All 225,000 policyholders – those with life, pension and health insurance policies – will have their claims honoured by the State.  10,000 of the 25,000 depositors are owed amounts less than $75,000 and those claims can be settled now.  Which leaves 15,000 depositors to choose between litigation or accepting the present offer of a discount on their monies.

The Second, is in relation to the erroneous portrayal of the impact of discounting on the claimants who accept the government’s offer.  There seems to be an error in the calculations upon which the PM relied in making her statement –

“…We are going to give some help.  These installment instruments I am saying can be cashed in early at financial institutions.  Yes, they will be cashed in at a discount. But I have been informed by the hon. Minister of Finance, Mr. Winston Dookeran, that based on discussions with local financial institutions, that if the first five years of installment notes were cashed in, the discount could be as high as or as low as—when we look at it the glass is half-full or half-empty, depending on how you look at it—5 to 10 per cent.  What this means is for every dollar, you could get between 90 to 95 cents per dollars if you decide to discount.  I am so advised…”

Apart from my not understanding the selection of the first five years of investment notes as a point for discussion, the calculations are misleading, since the actual discount at those rates (with which I concur) will have a far greater impact – see http://wp.me/pBrZN-qh for a detailed explanation.