This week the examination shifts to the scale of the failure of our national housing policy – see <http://www.vision2020.info.tt/pdf/Policies and Procedures/Strategic_Corporate Plans/Housing Plan.pdf>.  Three main points for consideration are –

The overall picture is stark –

Given the combined effect of all this, which is probably hidden to most of today’s readers, one can only wonder at the patience of our needy citizens.

The entire situation also raises potent questions about the purpose and performance of the SPEs.

SIDEBAR: The concept and importance of opportunity cost and housing subsidy

Let’s use a typical home at Fidelis Heights as an example.

In the prevailing cost-based pricing model, this is considered a satisfactory, ‘zero-subsidy’ result, since the State has recovered all of its costs. Another phrase in the lexicon is the ‘cost-recovery’ model of pricing.

The danger, as shown in the example in this article, is that the ‘cost-based’/’cost-recovery’ model ignores opportunity cost.

The opportunity cost is the difference between the actual selling price of the unit and the market value. The HDC could sell each Fidelis Heights home for $1.7M, but has made the decision to sell at a reduced price of $825,000, which means that each sale is at the loss of those possible earnings. That amount of the loss incurred by the decision to sell at a lower price is called the opportunity cost. It is important that opportunity cost be identified and quantified as an element in all decision-making, both private and public sector. A decision-making process which ignores or obscures opportunity cost is negligent at the very least and can encourage corrupt practices and the dilution of capital. 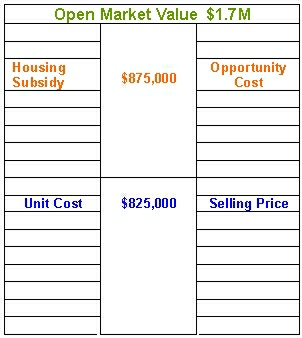 $875,000 is enough money to build at least three modest homes, yet this system has allocated that much money to each Fidelis Heights purchaser, each of whom qualified for a mortgage at that level.

As a result of this questionable choice and the resultant shaky pricing model, there is an enormous ‘leakage’ of housing subsidy and opportunity cost.

The opportunity cost can also be described as the housing subsidy since that is the difference between what a Fidelis Heights unit actually sold for and what a purchaser in the open market would have to pay for a similar unit.
The two terms are therefore synonymous – Opportunity Cost is exactly equal to Housing Subsidy.

•
A version of this commentary appeared in print on August 5, 2010, on page 13 of the Business Guardian.